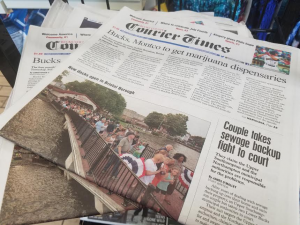 Northeastern Pennsylvania-born Stanley W. Calkins was a self-made man and had already had established himself in the newspaper business when he purchased the then 44-year-old Bristol Daily Courier in 1954. Within a short period of time, Calkins merged the Daily Courier with the Levittown Times and formed the Bucks County Courier TImes.

The newspaper covered the boom of Levittown and at one time delivered more than 50,000 editions per a day. During the last decade, the Bucks County Courier Times even hit driveways and newsstands seven days a week instead of its current six-day schedule.

For more than 60 years, the Bucks County Courier Times was published under the ownership and often management of the Calkins family, based for decades in an office building just off Route 13 in Tullytown.

The exact details on how the transition will impact the publications was not immediately clear. Spokespersons for Calkins Media and Gatehouse Media, which owns about 130 daily newspapers and hundreds more weekly newspapers, declined comment.

The sales appear to mark the end of the Calkins ownership of local news organizations. The family has been involved in newspapering for 80 years with their first publications in the western portion of the state.

The recent sale of the Bucks County Courier Times and Doylestown Intelligencer to GateHouse Media, which is owned by Japan’s Softbank, means that Bucks County will have no locally-owned daily print newspapers. However, it is widely known that GateHouse Media plans to keep the presses rolling on the Calkins Media newspapers it purchased.

“It means the loss of owners who really understand the communities that the papers are based in. The Calkins family has owned these papers and been based here for decades. So they have a feel and an affinity for this area that owners from the outside aren’t likely to have,” said Tony Rogers, Bucks County Community College’s journalism professor who has worked at the New York Daily News and Associated Press.

The Bucks County Courier Times has played a big role in the area’s past and present. They have supported many fundraising efforts and informed the region even as the print circulation has shrunk and website hits have grown.

Calkins Media and its two regional newspapers employ dozens of Bucks County residents in its Tullytown and Doylestown offices. At its printing plant in Falls Township, workers help put the newspaper to press six days a week and contractors go out and deliver the product in the pre-dawn hours.

Current Calkins Media employees and former employees have noted they were surprised by the timing of the sale to Gatehouse Media but knew it would eventually come. Several current employees said there was worry since the announcement of the sale in the company’s offices about whether Gatehouse Media would layoff staff after the sale was completed.

There was some assumption among several people that NewtownPANow.com spoke with that the cuts would be made to the Calkins Media corporate staff. Under the new ownership, many positions would be redundant to ones already held at GateHouse Media’s offices in New York.

Calkins Media CEO Mark Contreras landed a job as the dean of the School of Communications at Quinnipiac University. His new position was announced days after the sale of the media company.

The decision to sell Calkins Media was based on economics, according to statements from the family. Charles C. Smith, a member of the Calkins family and a member of the board of directors for the media company, said in a statement that the “sole driving factor” for the sale was economics.

Earlier this year, Calkins Media received around $82 million from the sale of several TV stations in the south.

While the company has seen cuts at its newspapers in the past decade, job cuts and the slicing of vacant positions have not been as harsh as at chain-owned publications. Chain companies like Gannett, Digital First Media, GateHouse Media and Lee Newspapers have lost thousands of employees over the past few years.

“The overarching problem is this: for decades newspapers have relied overwhelmingly on revenue from circulation, meaning sales of the paper and printed advertising. But both of those revenue sources have been drying up for a long time, even more so in the internet age,” Rogers said.

“Some people wonder why newspapers don’t just shut down their printing presses altogether and rely on revenue from their websites. But it’s proven very difficult to generate significant amounts of revenue from digital ads or website subscriptions,” he added.

GateHouse Media has garnered a reputation in recent years for purchasing local newspapers and making cuts to staffing. Earlier this year, cuts hit publications owned by the chain.

“Gatehouse as an owner is potentially worse than some other big chains because it is owned by hedge fund investors with no background in or long-term commitment to the newspaper business or local journalism. Their goals can be short-term, and if they can make a good return on their money by milking the profits of a declining business over the next few years, they don’t necessarily care what happens to the newspaper after that,” said Matt DeRienzo, the executive director for Local Independent Online News Publishers and a former publisher at the Digital First Media newspaper chain.

DeRienzo explained that GateHouse Media has a formula when they purchase locally-owned newspapers. They often shrink the size of local staffing at various levels.

“As the product declines and revenue shrinks accordingly, they cut even more newsroom staff. At some point they cash out and leave town,” DeRienzo said.

Rogers, who has authored a journalism textbook, stated GateHouse Media may make a good steward of the newspaper and he did not want to make predictions but commented on what commonly happens when chains buy local newspapers.

“The common thread when big newspaper chains take over small local papers is consolidations and layoffs. Big chains tend to downsize newsrooms, many of which have already been thinned out from previous layoffs,” Rogers said. He added: “And that’s never a good thing because good journalism is labor-intensive.”

In the late 1990s, the Bucks County Courier Times, The Intelligencer and Burlington County Times formed one web presence, PhillyBurbs.com, to make a central hub for the newspapers’ content. The single website eventually shifted to sites for each newspaper and video content produced online for each newspaper. The videos were part of Calkins Media’s efforts to try to define itself in a future that was less print-focused.

The regional newspapers made a major step forward in 2004 when they opened a new Falls printing facility where the Bucks County Courier Times, Burlington County Times and The Intelligencer are printed. The building cost the company $34 and included a multi-million dollar Geoman 70 press that could turn out crisper pages quicker than ever before.

Some operations have been consolidated between the Bucks County Courier Times, The Intelligencer and Burlington County Times in recent years as Calkins Media has looked to save money. 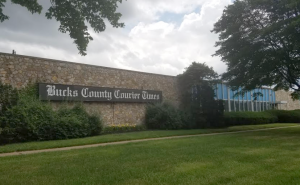 Over time the newspapers have shrunk in size and vending boxes have disappeared from the streets, but reporters, multimedia journalists, editorialists, web producers and columnists have continued to deliver news under the Bucks County Courier Times masthead.

There are several smaller weekly and monthly publications, like the Lower Bucks Leader, that are locally owned.

The weekly Bucks County Advance is owned by Digital First Media and the Lower Bucks Times is run out of Cherry Hill, New Jersey.

Also online, The New Hope Free Press is locally owned and publishes content regularly onto the internet while the Patch.com network of local sites is owned by a New York hedge fund and AOL.

“A strong local newspaper is an important component in the quality of life of any community, in the same way that good schools, clean public parks and other things are. Owners who live in that community will naturally have a stake in maintaining that quality of life. That commitment is something that develops over time, and it won’t come naturally to outside owners,” Rogers said.

Without local ownership of a daily newspaper in towns across the country, DeRienzo believes the void will be filled by online news organizations.

“Local independent online news sites such as Levittown Now are springing up in communities across the country and not only filling the gaps left by declining newspapers, but in many cases providing deeper coverage than they ever did on some subjects. Communities will take matters into their own hands if out-of-state chains like this squander and scavenge what was an important local resource,” he said.

Despite the change in ownership, the news cycles goes on.