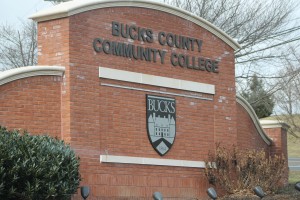 The Bucks County Community College sign at the Newtown campus.

Chelius, who wins a $200 honorarium for placing first out of 56 entries, entered his story “The Friendly Neighborhood Car Gauger,” said Elizabeth Luciano, the literature professor who launched the contest. He’ll read his winning story at a reception from 1 – 3 p.m. Sunday, December 3, in the Orangery building on the Newtown Campus.

Also reading at the celebration will be second-place winner Dave Roth of Yardley, who takes home $100 for his story “The Road to Albiano.” Joining in will be Joy Waldinger of Warminster, who captured third place and $50 for “Sheet Thief.”

The final judge, Philadelphia novelist Janet Benton, will speak at the celebration. She will discuss the creative writing process, read from her work and take questions. Benton is the author of the historical novel Lilli de Jong, published by Nan Talese/Doubleday earlier this year.

Chelius’ winning story is about an isolated older woman jealous of a neighbor’s visits from a grown son, noted Luciano.

“In language that is carefully chosen, concise, and often delightful, this story reveals the outer and inner layers of its main character,” Benton wrote of the winning entry. “(Her) miserly disposition is in part a cover-up for her fear of depending on others and thus of being vulnerable. The story’s third-person limited point of view brings us Louise’s ungenerous perspective while also letting us see that  Louise…is lonely.”

“I am thrilled to hear that the squabbling next-door neighbors in my short story have taken their dispute about parking outside of their Philadelphia row house neighborhood and into the Bucks County suburbs,” said Chelius. “I’d like to thank Bucks County Community College for thinking up this competition – and for continuing to encourage the creative efforts of Bucks County residents.”

Roth’s story is about a husband who realizes, during a hiking trip in Italy, that he has become unnecessary to his wife. Benton cited the story for its “precise observations” and noted she “found it touching to be brought close to his crisis of confidence.”

Waldinger’s story about a young narrator’s longing for a truly intimate relationship is marked by a “lively voice,” “the uniqueness of its language,” and its moving depiction of a “missed opportunity for deeper intimacy,” Benton noted.

The contest was open to adults who are residents of Bucks County. A similar contest for high-school students in the county will be held next spring.

The Bucks County Short-Fiction Contest reading and reception on December 3 is free and open to the public. Bucks County Community College is located at 275 Swamp Rd., Newtown, Pa., where there is ample free parking.

Get the latest headlines in your inbox each evening at 9 p.m. for free.

You have successfully joined our email newsletter.