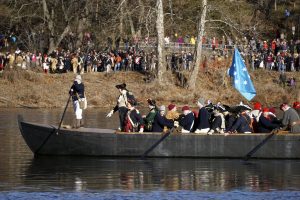 In the face of adversity, a Christmas tradition will go on despite a last-minute threat.

Thanks to a Philadelphia based-nonprofit that is donating handmade boats, the annual reenactment of General George Washington’s crossing of the Delaware River on Christmas will happen despite low water levels, an official from the park said.

The crossing was put in jeopardy due to low water levels. The regular Durham boats that have been used in the reenactment need about 18 inches of water to float. Officials at the Washington’s Crossing Park indicated at the dress rehearsal earlier this month that the water would likely not be high enough by Christmas.

Philadelphia Waterborne, a nonprofit that teaches middle and high school students boat building skills, is lending six boats to the effort. The handmade rowboats will only draw about six inches of water, park officials said, ensuring that Washington and his men will easily be able to cross from Pennsylvania to New Jersey.

“While Durham boats were used in the 1776 crossing, historians agree that General Washington probably used various river craft to make his crossing. So there is some historical authenticity to this year’s very unique reenactment,” park officials said.

The crossing will take place at 12:30 p.m. on Christmas Day at Washington’s Crossing Historic Park in Upper Makefield.

Erich Martin attended Bucks County Community College for two years where he was the Co-Editor-in-Chief of the Centurion, the college newspaper. Erich is currently attending Temple University in order to complete his degree in Journalism. Erich was recognized at the Pennsylvania Newspaper Association Foundation's Keystone Press Awards in 2014 for general news. In downtime, Erich enjoys spending time with friends and family. Aside from spending time with family and reporting news, Erich loves getting engrossed in a great game, book, or movie.