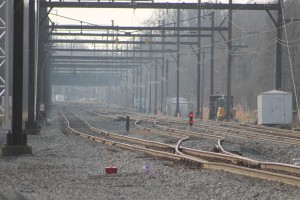 Below is the text of the letter:

Thursday morning the Regional Rail system experienced a major service disruption that caused inconvenience to our customers. At 8:45 a.m. the system lost overhead power on almost all tracks between 30th St and Temple U when a wire insulator, a critical component in one of the more complex overhead wire areas on the system, failed and broke loose.

As a result of the insulator failure, a section of wire came down over one (of the two) inbound tracks between 30th St and Suburban Station. Because the overhead wire system is complex in this stretch, the wire breakage caused a cascading loss of power from the area just south of 30th St all the way north to Temple U Station. When this happened, several trains were stopped at or traveling between stations. As always, customer safety was an immediate priority, so supervisory, police, and maintenance emergency personnel were immediately directed to all trains where customers might have to be evacuated. A diesel locomotive was also ordered as soon as the incident was reported to be used for rescue duty.

By 9:35 a.m. our Power Department was able to restore power to almost all areas; and most standing trains began to move. The power remained out in the immediate section where the insulator had failed with 2 trains, 9728 and 9342, both with several hundred customers onboard, stuck in the de-energized section. Platform boarding at 30th Street was also impacted during this time, for trains back in operation.

Because we were able to restore power on the other tracks, a train-to-train rescue operation was executed for train 9728, and by 10:15 a.m. all customers were safely and successfully transferred. Power was also restored to train 9342 at approximately the same time.

Once service resumed, considerable delays and disruptions continued. Because so many trains were knocked out of their normal duty cycle, many delayed crew members faced the possibility of exceeding the federal Hours of Service law that governs the number of hours that railroad employees may work. These manpower and equipment utilization complications often create a domino effect, across the system hours after repairs are completed. This early morning incident had a direct impact on service later in the day with ongoing delays and a few cancelled trains during the evening rush.

After the de-energized train sets were cleared of the tracks, the Wire Train and Power maintenance personnel, already in place began repair work and by 1:50 p.m. the failed insulator was replaced and overhead power was restored to all tracks.

After any incident, we do a thorough review and investigation with everyone involved from the General Manager to the Power Maintenance crews. We will be looking closely at the failed insulator, which was only about 10 years old. Because it stopped functioning well in advance of its expected useful life, our Power Department Engineers will complete testing on this component to determine the cause.

We apologize for the inconvenience our customers experienced. We will continue to address every problem area and work aggressively to improve service and reliability.