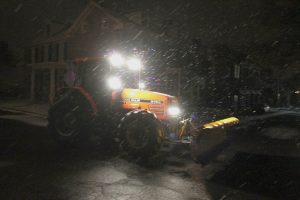 There some “uncertainty” in the forecast, but Lower Bucks County is expected to see some snow Tuesday morning.

The coastal storm is expected to bring precipitation starting as rain to the area Monday night into early Tuesday. The National Weather Service is calling for between 1 to 2 inches of snow to fall in the morning hours.

“The steadier accumulating snow is expected to end before the start of the morning commute on Tuesday,” forecasters said in a Monday afternoon briefing.

“Overall, forecast confidence of snowfall amounts has increased, but there remains some uncertainty to where a small band of heavier snow could fall,” they added.

The region has seen three coastal storms in the past few weeks. Last Wednesday’s storm dropped about a foot on snow in the Levittown area.