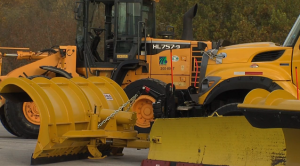 Forecasters at the National Weather Service were calling for 12 to 18 inches of snow to fall between Tuesday night and Wednesday evening as part of the nor’easter.

“Uncertainty remains with where the heaviest snow bands will develop on Wednesday, and thus with the exact snow amounts,” forecasters said in a Tuesday afternoon briefing.

“This will be a heavy, wet snow which will be difficult to shovel and will stick to trees and power lines. This, combined with the strong winds, could lead to power outages and tree damage,” they added.

Along with snow that could fall at rates of 2 to 3 inches an hour, strong winds and gusts as high as 50 mph are expected.

By Tuesday evening. the Council Rock School District and Middle Bucks Institute of Technology announced they had cancelled classes for Wednesday.

Gov. Tom Wolf said that state agencies are standing by for the Tuesday into Wednesday storm.

“We need everyone to keep an eye on their local forecast and allow plenty of travel time as you’re headed out,” he said.

The Pennsylvania Emergency Management Agency’s Commonwealth Watch and Warning Center was staffed Wednesday at an Enhanced Watch, meaning extra personnel are working closely with county emergency management staff and 9-1-1 centers to monitor conditions. Starting Tuesday at 8 p.m., staff from the Pennsylvania State Police and the Pennsylvania Department of Military and Veterans Affairs will be at PEMA’s Commonwealth Response Coordination Center to more promptly respond to incidents or unmet needs at the county level. Staff from other agencies will be available as needed to provide any state support to counties.

Due to expected weather-related roadway conditions, the Pennsylvania Turnpike will be imposing a ban on empty straight CDL-weighted trucks, tractors hauling double trailers, tractors hauling empty trailers, trailers pulled by passenger vehicles, pick-up trucks, motorcycles and recreational vehicles, commercial vehicles, or RV, after 8 p.m. Tuesday on numerous interstates across the commonwealth, including I-76, I-276, and I-476, and others.

In a news release, the Pennsylvania Turnpike is reminding motorists that during a weather emergency, the objective is to keep roads passable, not totally free of snow or ice. Turnpike crews will continue to treat until precipitation ends and roads are clear. Motorists are advised to always travel at a safe speed for conditions, allow plenty of space when driving near plow trucks, and to never pass a truck actively plowing or spreading salt.

In case of an accident, breakdown or other emergency, Turnpike motorists should dial *11 on a mobile phone. Be prepared to give the milepost location and direction of travel and move vehicles out of active travel lanes if possible.

Since so many residents in Lower Bucks County lost power from the last nor’easter, PECO officials said they are monitoring the storm closely.

PECO has mobilized field and support personnel, including tree crews, to be ready to respond to any potential service interruptions that may be caused by the storm. In addition to PECO’s employees, contractors from ComEd in Illinois have been dispatched to assist if needed.

“Just as we make preparations before a storm, we ask our customers to also prepare for the impact of severe weather,” said PECO Senior Vice President and Chief Operating Officer Mike Innocenzo. “As we have recently experienced, the widespread and extensive tree damage caused by nor’easters, especially the combination of ice, heavy snow and wind, can lead to extended outages. Preparing in advance and having alternate plans in place are critical steps for everyone to take as major weather systems threaten.”

PECO is asking all customers, including those with smart meters to report their outage either online or via their free mobile app. Customers may also report outages and downed wires by calling 800-841- 4141, on peco.com and through mobile devices.

Customers with special needs, such as those who may be elderly, disabled or dependent on electricity for medical equipment, should have alternate arrangements in place should they experience an extended power outage.