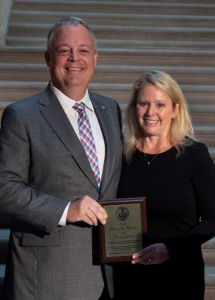 A Newtown woman was honored in Harrisburg as part of a ceremony marking 2018 as the “Year of the Pennsylvania Woman.”

The business has been in her family for three generations and opened by her father in 1970.

“Eileen was an easy choice for being honored today because she stands out not only in succeeding in an industry dominated by males, but also as a compassionate member of the community and champion of her friends and all neighbors,” said Democratic State Rep. Perry Warren.

Slezak has served as a children’s religious education instructor at St. Andrew Catholic Church and co-founded locally-based The Shamrock Girls, which assists people in crisis and those fighting cancer.

Slezak is a graduate of Council Rock High School and has a degree in small business management from Goldey-Beacom College.

“By naming 2018 ‘The Year of the Pennsylvania Woman,’ we’re encouraging all women to pursue and attain their dreams and goals,” Warren said. “Today’s awardees are an inspiration to women like my three daughters and all women in our communities.”