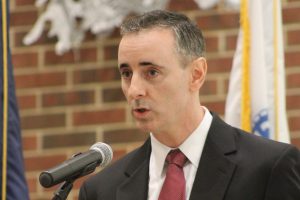 President Donald Trump has signed a piece of legislation with Bucks County ties to beef up airliner security into law.

The president put his signature on the multi-part FAA reauthorization measure that also included the Saracini Aviation Safety Act, a piece of legislation that has been working its way through Washington D.C. for several years.

Republican Congressman Brian Fitzpatrick applauded the passage of the act that requires all new airliners to have lightweight wire-mesh gates installed to provide a secondary barrier to the cockpit. The added security will allow the flight deck crew to open the cockpit door without risking someone with bad intentions gaining access to the plane’s controls.

“This critical measure seeks to prevent our aircraft from being hijacked again. I am deeply appreciative of the dedication of Ellen, Josh, and my bipartisan colleagues who worked fervently to enact this measure. American citizens are undoubtedly safer,” Fitzpatrick said.

The Saracini Aviation Safety Act has been supported by Lower Makefield resident Ellen Saracini. Over the years, she has advocated for the change for years in memory of her late husband Captain Victor Saracini, who flew United Flight 175 before it was hijacked and crashed into the World Trade Center in 2001.

“More than 17 years after terrorists breached the cockpit of my husband’s airplane on September 11, 2001, our skies are still susceptible to similar acts of terrorism. It is my mission to work with Congressman Brian Fitzpatrick to ensure we are doing everything we can to negate the known vulnerability on the flight deck aboard our nation’s airliners because, without secondary barriers, we are just as vulnerable today as we were on that fateful day,” Saracini said in a statement. “Congressmen Fitzpatrick and Gottheimer, along with Senators Toomey and Casey, have led the charge in Congress to make our skies safer.  Our mission will continue until ALL commercial aircraft contain secondary barriers to protect passengers and crew.  We will not stop fighting until common sense legislation is achieved.”

Democratic Congressman Josh Gottheimer of northern New Jersey joined with Fitzpatrick in late summer at the Garden of Reflection in Lower Makefield to voice support for the bill.

Fitzpatrick said last week that there is still an effort to move forward regulations that would require all current passenger aircraft contain inexpensive secondary barriers.