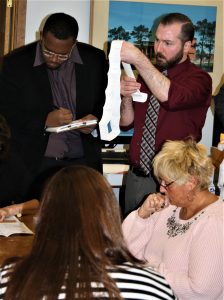 It has been a busy week for the Bucks County Board of Elections in Doylestown. Although the election was on Tuesday, Friday remained work-filled as staff began the final process before certifying results next week.

Under the watchful eye of a number of members of the public, elections officials began looking over voting machine results and absentee ballots. The focus of almost all the observers was the Sixth Senate District race between Incumbent Republican State Sen. Tommy Tomlinson and State Rep. Tina Davis, his Democratic challenger.

Tomlinson was ahead of Davis in the unofficial tally by exactly 100 votes, but that number shifted slightly as the count continued Friday. The difference was not immediately released.

With more than 100,000 votes cast in the district, it took most of Friday for officials to review the voting machine records. The final counting will continue next week, Bucks County spokesperson Larry King said.

Tomlinson has claimed victory in the race and Davis has waited to see the results once every vote is counted.

King said elections officials are investigating all provisional ballots through Tuesday and tallying the remaining military and overseas absentee ballots, which are due to the county by 5 p.m. Tuesday. The accounting of all write-in votes has continued this week.

The race between Davis, a state representative from Bristol Township’s Croydon section since 2010, and Bensalem resident Tomlinson, who was first elected to the state senate in 1994, has been tough and was widely expected to be close. The Sixth Senate District has a Democratic advantage if you look at registration tallies. 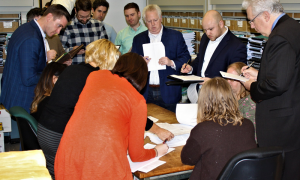 In the room for Friday’s count were attorneys representing both Democrats and Republicans.

Davis’ campaign will hold off on commenting until the votes are counted, campaign manager Aren Platt said Friday afternoon.

Tomlinson’s campaign manager Ryan Skoczylas said they were pleased with the results of the election and confident that the Republican incumbent is the victor.

No matter the outcome of the final count, she has a job as a legislator. Davis won her current state representative seat against Republican Anthony Sposato on Tuesday. In Pennsylvania, candidates can run for two seats but only take one seat.