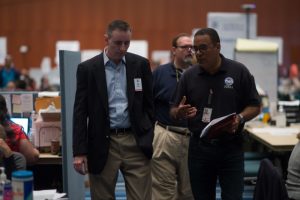 Congressman Brian Fitzpatrick will spend his second Thanksgiving as a legislator in Puerto Rico.

The Republican congressman, who recently won a second term, plans to return to the unincorporated American territory that is home to more than 3 million people to inspect the island’s recovery from hurricanes Irma and Maria, which have been blamed for contributing to the deaths of nearly 3,000 people.

According to the Federal Emergency Management Agency (FEMA), more than 166,000 homes need repair or reconstruction in Puerto Rico along with numerous major pieces of infrastructure. The reconstruction effort is expected to take years

“After Hurricane Maria effectively destroyed Puerto Rico’s electrical, water, telecommunication, and transportation infrastructure, many families in our community are rightly concerned about the restoration of vital services in Puerto Rico,” said Fitzpatrick. “As American citizens, the people of Puerto Rico deserve the full backing of the federal government and its representatives. I look forward to returning to the island to meet with residents, first responders, and government officials to inspect and assist with ongoing recovery efforts.”

Fitzpatrick plans to again meet with FEMA officials on the ground and spend Thanksgiving with residents and Salvation Army personnel providing assistance.

Earlier this month, Fitzpatrick stood with other lawmakers at a press conference in Washington D.C. to support efforts incentivizing medical professionals to remain on Puerto Rico to serve the population.