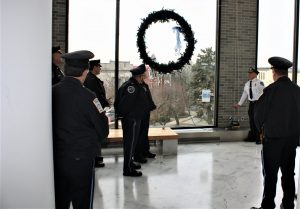 Harran switches on the blue wreath.
Credit: County of Bucks

The third-floor rotunda of the Bucks County Administration Building has a blue hue this holiday season.

The wreath features blue lights and 12 white ornaments to remember each of the Bucks County law enforcement officers who have died in the line of duty.

“We thank you for taking the time to recognize us with the symbol of the blue light for all police officers who are risking their lives every day all over this county,” President of the Police Chiefs’ Association of Bucks County and Bensalem Public Safety Director Fred Harran said. “We go to sleep at night knowing that our officers are out there patrolling, and that at any one moment something can happen.” 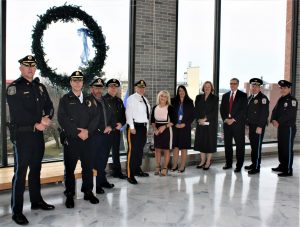