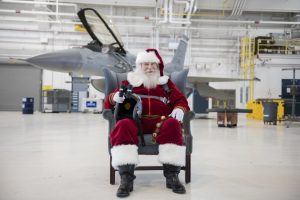 The North American Aerospace Defense Command, also known as NORAD, will be tracking Santa as he makes his annual Christmas Eve trek across the globe.

This is the 63rd year that NORAD, a join agency staffed by Americans and Canadians, has been keeping tabs on the jolly fellow who travels on a sleigh pulled by a group of reindeer.

Those looking to see where Santa is can log on to the NORAD Santa Tracker website and see his current location. A hot line staffed by volunteers is also open for those who wish to call in and find out where Santa is. The number is 1-877-Hi-NORAD (1-877-446-6723).

The NORAD Santa Tracker website features holiday games, music, and video of Santa for kids to enjoy when they’re on the website. 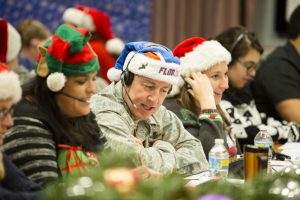 Despite this year’s partial government shutdown, the NORAD tracker program will continue, according to officials. The program has more than 1,500 volunteers that answer roughly 150,000 phone calls, 2,800 emails and 3,000 OnStar requests from children around the world

The NORAD Santa tracker started in the 1950s when Sears department stores placed an advertisement in a Colorado Springs newspaper telling children to call Santa. The phone number printed with the print advertisement was wrong and directed callers to the command center for the agency that preceded NORAD. A commanding officer instructed military personnel to tell the kids calling for Santa where he was at the moment. From there, the tradition has continued and grown over time.

The program is funded through corporate sponsorship and not taxpayer money, according to several reports.