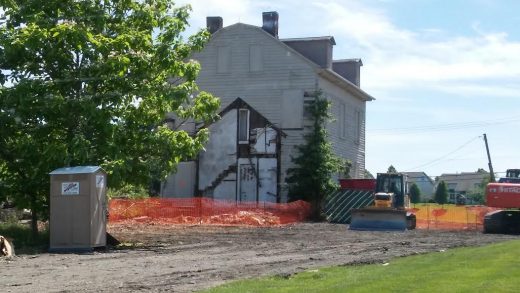 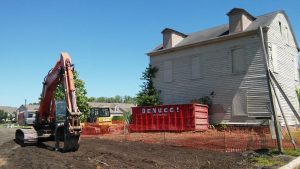 Newtown Township issued a Cease and Desist order after a portion of a historic farmhouse at the Villas of Newtown was demolished.

The order was issued Friday afternoon by the township zoning officer and hand delivered to the site off Upper Silver Lake Road by police.

According to the order, fines of up to $500 per day could be levied against McGrath Homes for every violation.

Officials said McGrath had no permission or permit to demolish the six-foot by six-foot kitchen that is connected to the house.

By afternoon, construction equipment sat silent and no workers were at the house, but a scar where the kitchen was removed from the historic Cunningham House was visible.

In March, the Newtown Township Board of Supervisors and McGrath Homes reached an agreement that the house would be lifted until a modern foundation can be poured. The interior and exterior were to be “restored” and a garage, elevator and modern kitchen were to be added. In addition, McGrath will also construct three new buildings with two units each at the age-restricted community off Upper Silver Lake Road. The three new buildings will match the style of the more than 150-plus units already at the Villas of Newtown.

Supervisor Jennifer Dix, who lives near the house and discovered the demolition work Friday, told NewtownPANow.com that the agreement was passed but never finalized. She also said she was not aware of any permits obtained by McGrath to work on the home.

McGrath has not formally requested a further development approval at the site. 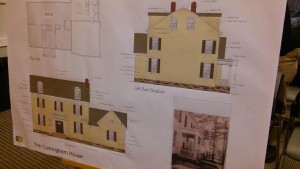 A proposal of what the finished house would look like.
Credit: Tom Sofield/NewtownPANow.com

The battle over the farmhouse has heated up in the past two years. A 2006 agreement for the Villas of Newtown involved the house being restored. Due to several factors, including the economic downturn, the plan for restoration fell apart and McGrath took out permits to demolish the building in 2014.

John McGrath, who operates McGrath Homes, was not able to be reached for comment Friday afternoon. However, he told NewtownPANow.com in March that he would work to restore the home.

The home was part of a large nursery and built in the first half of the 1800s by the Cunningham family, a family of wealthy timber merchants from New England.