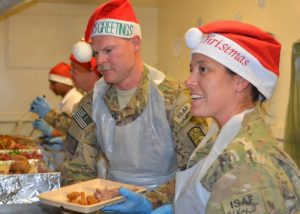 Congressman Brian Fitzpatrick will be spending Christmas day in Afghanistan.

The Republican freshman’s office confirmed Saturday morning that the congressman will head to Afghanistan with a bipartisan group to thank servicemembers deployed in the country. As a member of the House of Representatives Homeland Security and Foreign Affairs committees, he will also use the trip to gather information on anti-terror efforts, force posture and threats in the Middle East.

Fitzpatrick released the below statement:

“As families across our district enjoy another holiday season safe at home, it is often easy to forget that there are thousands of women and men serving our country in battlefields and barracks across the globe – including combat zones like Afghanistan. We owe a debt of gratitude to these brave servicemembers who stand ready to protect our freedom, even when it means being deployed overseas during this special season. This trip provides the opportunity to not only say ‘thank you’ to these heroes, but to speak directly with our troops, military generals and governmental and diplomatic officials about the situation on the ground in Afghanistan and throughout the region. As we enter a new phase in the War on Terror, it is crucial that Congress continue to work with our military and civilian partners to keep our homeland safe and to defeat the threat of terrorism; this mission will play an important part in shaping this strategy.”

This will mark the second Christmas that Fitzpatrick will spend overseas. Then-FBI Special Agent Fitzpatrick spent Christmas 2007 deployed in Iraq as an interrogator.

Vice President Mike Pence made a surprise visit to Afghanistan in an unassuming military cargo plane earlier this week. Pence, the highest-ranking official from the current administration to visit a combat zone, talked with soldiers who are deployed and met with Afgan President Ashraf Ghani before leaving the country where American troops have been fighting since 2001.