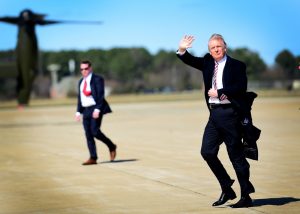 On the same day that Gov. Tom Wolf issued a disaster declaration for the opioid crisis in Pennsylvania, President Donald Trump signed a new law that could help saves lives.

The International Narcotics Trafficking Emergency Response by Detecting Incoming Contraband with Technology (INTERDICT) Act was introduced by local Congressman Brian Fitzpatrick, a Republican, and Congresswoman Niki Tsongas, a Democrat from Massachusetts. It was passed by the House of Representatives in October and the Senate in December before being sent to the president’s desk.

Fentanyl, although primarily a pharmaceutical, is fatally linked to illicitly manufactured and illicit versions of chemically similar compounds. The drug is often smuggled from Mexico or China in small amounts due to its potency – making it difficult for authorities to detect. Deaths involving synthetic opioids such as fentanyl rose 72 percent between 2014 and 2015, amounting to 9,500 deaths.

“In 2016, more than 42,000 Americans died from an opioid overdose, with nearly half being directly attributed to fentanyl and other synthetic opioids. Halting the proliferation of these illicit drugs from Mexico and China is a crucial step in addressing our nation’s opioid epidemic,” Fitzpatrick said in a statement. “The INTERDICT Act is bipartisan legislation that provides U.S. Customs and Border Protection (CBP) access to the latest in chemical screening devices and scientific support to detect and intercept synthetic opioids before they can cause harm. I’m proud that my first piece of legislation signed into law focuses on this important issue and works to keep this poison off our streets.”

Fitzpatrick’s office noted the INTERDICT Act was mentioned in the President’s Commission on Combating Drug Addiction and the Opioid Crisis’ interim report.

“Addiction is a complicated problem which requires multi-pronged approaches. The introduction of fentanyl increases the death rate associated with opioid overdose. This bill strengthens one important prong in effectively intervening with this devastating problem that affects us all,” said Beverly Haberle, executive director of the Council of Southeast Pennsylvania.

Bucks County District Attorney Matt Weintraub said he was “grateful” for the  INTERDICT Act and said it will save lives.