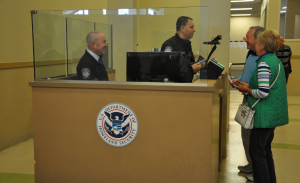 A piece of legislation drafted by Congressman Brian Fitzpatrick and aimed at keeping travelers safe through improved vetting procedures passed the House of Representatives Tuesday.

The Screening and Vetting Passenger Exchange Act of 2017 passed with bipartisan support by 415-1, according to the congressional record.

The bill, if it becomes law, would require management of the Department of Homeland Security to develop a set of best practices for making the most of advanced passenger information and passenger name record data within 270 days of approval. The legislation would also make the set of best practices available to other nations including Visa Waiver Program countries and provide assistance in implementation of the rules.

“Advanced passenger information (API), or biographic information about a traveler, and passenger name record (PNR) data, or data about a traveler’s reservation and itinerary, are valuable tools used for screening and vetting potential criminals and terrorists. Department of Homeland Security, especially Customs and Border Patrol (CBP) and the Transportation Security Administration (TSA), utilize these data sets to confirm the identities and travel patterns of travelers before they are able to enter the U.S.,” the congressman’s office said in a statement.

The European Union in 2016 adopted a new directive that member states use passenger name record data to help prevent and investigate terrorism. The congressman’s office said that many American allies in Europe lack the capability to implement the directive by the May 2018 deadline. The legislation allows the Department of Homeland Security to work with other nations as they come into compliance.

Fitzpatrick, a Republican who previously worked as an FBI special agent, said his career in law enforcement allowed him to see the dangers of terrorism firsthand.

“I also saw my colleagues in the [FBI] and across our nation’s security and intelligence agencies hampered in their mission by a lack of information sharing between the United States and our allies, and when other countries abided by less stringent security and vetting protocols,” Fitzpatrick said in a statement.

Congresswoman Kathleen Rice, a Democrat from New York, authorized the bill with Fitzpatrick.

“We need to set and hold ourselves to the best vetting standards in the world, and we need to work with our partners overseas to make sure they can meet the same standards,” she said.