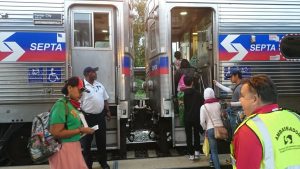 There are going to be a lot of Philadelphia Eagles fans heading from Bucks County to the city for Thursday’s big celebration.

Philadelphia officials have not released how many people they expect, but previous sports championship celebrations have drawn as many as two million fans to Center City. And on Tuesday morning, officials said the Benjamin Franklin Parkway can hold as many as 3 million people.

Mayor Jim Kenney told reporters Tuesday morning that spectators from the suburbs are better off taking public transit down to the Super Bowl celebration. He said those who drive may end up getting struck in traffic and miss everything.

After being criticized for their handling of large crowds during the 2008 Philadelphia Phillies World Series parade, SEPTA General Manager Jeffrey Knueppel said the transit agency is prepared for Thursday’s big celebration. He added that extra resources will be available and lessons learned from other large events have been taken into account.

Knueppel explained that SEPTA can carry about 500,000 to 550,000 people to the celebration via their network that links the suburbs and city.

“Make sure you put a good solid travel plan together,” Knueppel said.

If You Are Driving

Driving down to any point along the roughly five-mile parade route Thursday will be a hassle. Aside from the regular hustle and bustle of Philadelphia, there will be many road closures and limited on-street parking the closer you get to the festivities. In addition, there are expected to be more at least a million people downtown and many of them will drive and have to park. City officials said they expect “significant travel delays” on roads Thursday.

Parking will not be permitted at the stadium complex in South Philadelphia.

The Philadelphia Parking Authority will not be enforcing meter and time limit regulations Thursday. Offices noted that safety violations such as parking too close to the corner, fire hydrants, blocking crosswalks and double parking will be enforced.

If You Are Hitchhiking

Don’t do it. Seems like an unsafe plan. (Right?)

If You Take SEPTA

SEPTA said they’re prepared for the crowds and have implemented a plan to get everyone to and from the big celebration.

The Market-Frankford Line and the Broad Street Line will both be free all day Thursday thanks to Independence Blue Cross. The subway system will be able to transport spectators around the city to the celebration.

A limited number of  to-and-from Regional Rail stations will be open and providing service to Center City. The trains will either travel to Jefferson Station and 30th Street Station, both within walking distance of the Eagles celebration.

Below are the Regional Rail stations in Bucks County that will be open on each line:

For celebration-day travel on Regional Rail, customers must have one of the following fare products: Weekly or Monthly TrailPass, an Independence Pass, or a pre-purchased senior/reduced fare ticket. Starting Tuesday, SEPTA began selling a special discounted Independence Pass for $10. The pass will be available at sales locations, and in limited numbers the day of the parade at open stations.

Parking lots at in-operation Regional Rail stations will be open. However, the number of parking spots is limited, especially at the Doylestown, Croydon and Langhorne stations.