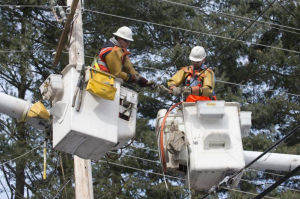 The lights are coming back on after wide-spread power outages.

PECO reported a little under 1,000 customers remained without power between Newtown, Upper Makefield, and Wrightstown as of early Sunday afternoon. The number was down from 3,200 customers Saturday afternoon.

The largest bulk of outages were centered in Upper Makefield.

A PECO spokesperson said crews were out working around the clock to restore power. The large majority of customers should have power restored by Monday evening.

Some localized pockets with heavy damage may not have service until later in the week, the spokesperson said.

“PECO’s restoration priorities are public safety and critical care facilities, such as 911 centers, hospitals and pumping stations. Then restoration is generally scheduled so that the greatest number of customers can be restored as quickly and as safely as possible. However, in cases of extended power outages, consideration is also given to customers who have been without service for the longest,” the utility company said in a statement.

“We understand the natural frustration that comes along with these storm-related service interruptions,” said Mike Innocenzo, senior vice president and COO for PECO. “Rest assured, we have marshalled every resource available and will be working 24/7 until power is safely restored for our customers.”

Crews from power companies around the country were called in to help PECO restore power.