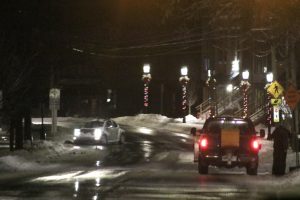 The snow totals forecast for the Levittown area was increased overnight.

The National Weather Service said Wednesday morning that Lower Bucks County could see as much as 8 to 12 inches of snow. The totals are an increase from the 4 to 8 inches predicted Tuesday afternoon.

Schools were closed and local towns were warning residents to be prepared for the late-winter storm aiming for the area.

The National Weather Service issued a forecast Tuesday evening that called for 4 to 8 inches of snow in Lower Bucks County. The higher accumulations were expected closer to the upper portion of the county. In addition to the snow, winds of 15 to 20 mph with gusts up to 30 mph were forecasted.

The Council Rock School District closed for Wednesday in advance of the storm. The Middle Bucks Institute of Technology also planned to close Wednesday.

Newtown Township declared a snow emergency in advance of the storm.

“It shall be unlawful to park, or to allow to be parked, any motor vehicle on any road or street within the Township following deposit or accumulation of ice or snow of one (1) inch or greater, in depth, until the snow has been completely plowed for the full width of the cartway,” according to the township’s declaration.

Newtown Borough police said the mayor declared a snow emergency that will take effect when at least 3 inches of snow falls. Vehicles parked on snow emergency routes will be ticketed and towed.

Gov. Tom Wolf signed a disaster declaration in advance of a winter nor’easter expected to hit the area late Tuesday night and continue into Wednesday evening.

The State of Emergency, also known as a disaster emergency declaration, will allow the state to more quickly obtain resources by removing the bidding process and access federal aid, according to Wolf’s office.

The State of Emergency does not stop motorists from traveling the roads or deal with what businesses can open.

“If you live north and west of Philadelphia, and north of I-195 in New Jersey, here’s our best advice to stay safe … be where you need to be by 7 a.m. Wednesday, then stay at that location through Wednesday in order to ride out the storm. Make sure your car has a full tank of gas, and your cell phone is fully charged,” forecasters said in a briefing.

Snowfall during the storm is expected to be a heavy, wet snow and could cause power outages when coupled with the winds, according to forecasters.

Municipal and state road crews were preparing Tuesday for the upcoming snowfall. PennDOT plans to move additional snow removal resources to the region to assist with cleanup.

“We are working with state agency partners to make sure county emergency management coordinators have quick and unfettered access to state resources as they’re needed,” Wolf said. “We also cannot emphasize enough the need for the public to take these storm warnings seriously, stay tuned to local media for weather updates and avoid any unnecessary travel.”