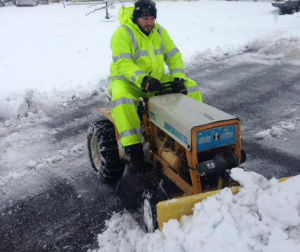 Deb Yemenijian, a spokesperson for PECO, said Bucks County had 77,000 customers without electric service as of 9:30 p.m. The area appeared to be among the hardest hit by Wednesday’s nor’easter that brought nearly a foot of heavy snow and light winds.

PECO has more than 2,600 employees working to restore power and has an additional 1,500 crews from other utility companies and contractors in the region.

Crews in the field were encountering outages caused by the snow, downed trees and branches and other weather-related issues, Yemenijian said.

PECO will work to get power returned as quickly as possible to customers, Yemenijian said. She added that some customers still have been without power due to last Friday’s nor’easter that brought high winds, rain and snow.

The Newtown area was hit hard by Wednesday’s late-winter nor’easter.

As of 8:30 p.m., there were just over 8,200 PECO customers without power service between Newtown Borough, Newtown Township, Upper Makefield and Wrightstown.

The Council Rock School District said classes will not take place Thursday due to road conditions and the power situation. The Middle Bucks Institute of Technology will also be closed Thursday.

Upper Makefield police said trees were down around the township and about 50 percent of all homes did not have power.

Municipal and PennDOT road crews were spread throughout the area as snow fell. However, the battle to keep the roads and highways clear as snow fell at a rate of up to two inches an hour was easily lost in the afternoon.

“In Bucks County, PennDOT has 37 department force trucks and 73 rentals for this storm. Bucks County had requested a Mobile Equipment Team due to higher expected accumulating snow in the county and that includes five wing plow trucks and two graders,” PennDOT spokesperson Bob Kent said.

Speed limits on Route 1 and I-95 were reduced to 45 mph through the afternoon. Restrictions on large trucks were also in place on the Pennsylvania Turnpike from Bristol Township to Harrisburg.

“Although PennDOT crews have been treating roadways, the department’s primary goal is to keep roads passable, not completely free of ice and snow. PennDOT will continue to treat roadways throughout the storm until precipitation stops and roads are clear,” PennDOT officials said.

By 3 p.m., just over 7 inches of snow was reported to have fallen in Lower Bucks County, according to a National Weather Service observer.

Thundersnow was reported the area.