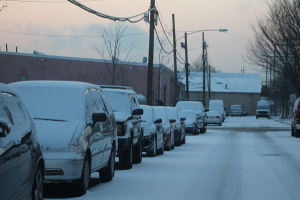 Lower Bucks County, according to the National Weather Service, is expected to see between 2 to 4 inches of snow. The precipitation is expected to fall between 4 a.m. and 10 a.m.

“Travel will become hazardous due to slippery roads and poor visibility when snow is heaviest, leading to travel delays for the Monday morning commute,” forecasters said.

The storm may develop over the area as a rain and snow mix before changing completely to snow, forecasters said. They added that the heaviest snow will fall before 8 a.m.

“With highs generally in the 40s and the sun coming out Monday afternoon, most, if not all, of the fresh snow should melt by day’s end. Temperatures should stay above freezing for most of the area Monday night as well, preventing a widespread refreeze,” forecasters said in a briefing package.