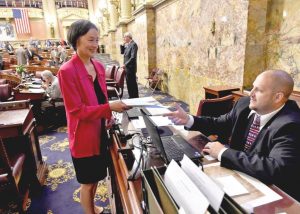 Democrat Helen Tai of Solebury was sworn in by U.S. District Court Judge Matthew Brann at the state capitol in Harrisburg as one of the newest state representatives. Tai was elected over Republican Wendi Thomas last month in a special election.

“It’s a distinct honor to represent my strong and devoted community,” Tai said. “I bring with me a love of public service and a vision to bring back good government for all and not just for special interests.”

Tai, who owns a business consulting firm, will serve of the state House of Representatives Local Government, Environmental Resources and Energy, and Children and Youth committees.

In addition, Tai introduced a “No Budget, No Pay” bill to withhold legislator pay if a state budget is not passed by the deadline of June 30.

“There are far too many late budgets coming out of Harrisburg. Every time the state misses payments for services, it costs the taxpayers their money. A law suspending lawmakers’ pay would help remind them of that,” Tai said.

Republican Scott Petri resigned last year to take over leadership of the Philadelphia Parking Authority. His resignation left the seat open and led to the special election.

The 178th Legislative District is made up of New Hope, Northampton, Solebury, Upper Makefield, and Wrightstown.