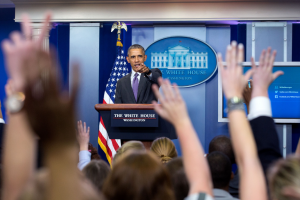 The former president’s endorsement came Wednesday and is just the first batch, according to his staff.

Davis’ campaign took little time to capitalize on the endorsement and send out social media posts and a fundraising email trumpeting the announcement.

“I’m proud to be the only Pennsylvania State Senate candidate to have earned the endorsement of president President Obama. Our message of better schools, a stronger middle class, and protections for women across Pennsylvania is gaining momentum. But it’s not just President Obama — as I knock on doors across Bucks County, I hear how our campaign is catching on and how excited people are to vote this November,” Davis said in a statement.

While endorsements are not uncommon in political races, Obama is a popular figure in the Democratic party in the era of Republican President Donald Trump.

“I’m confident that, together, they’ll strengthen this country we love by restoring opportunity that’s broadly shared, repairing our alliances and standing in the world, and upholding our fundamental commitment to justice, fairness, responsibility, and the rule of law,” Obama said of the endorsement of the 81 candidates.