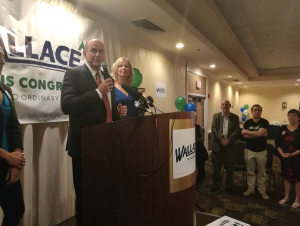 The Massachusetts senator, whose name has been floated as a 2020 presidential contender, is a big get for Wallace in his race against incumbent Republican Congressman Brian Fitzpatrick.

“Scott Wallace understands the importance of putting people first — not Wall Street, billionaires, or CEOs who already have too much influence in Washington. The people of Pennsylvania will never have to question who Scott works for, because he refuses to take a dime in corporate PAC money,” Warren said in a statement.

Wallace, whose net worth is reported to be between $127 million and $309 million, welcomed the endorsement and said he is “wholly committed to America’s working families.”

“I am refusing to take a dime in corporate PAC and lobbyist money so I will only be beholden to families in Bucks and Montgomery Counties and will work to reform campaign finance and the institutions that have allowed special interest money to pollute our politics. It’s time that Bucks and Montgomery Counties get a representative who protects the rights of the common man, who stands with you, and shares your values. With great allies like Senator Warren, we can get America back on track,” Wallace said in a statement.

Obama is expected to announce further endorsements down the road.