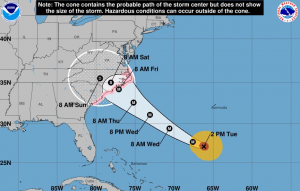 Forecasters and emergency planners in Bucks County are keeping a close eye on Hurricane Florence as it heads toward the East Coast.

As of Tuesday evening, the Category 4 hurricane was expected to hit the Carolinas later in the week, bringing strong winds, rain, and likely flooding. While the storm continued its trek toward shore, the exact track continued to fluctuate Tuesday as evacuation notices in North Carolina and South Carolina were issued.

For Lower Bucks County, forecasters are expecting rainfall from the storm and are keeping an eye on its track once its hits land.

National Weather Service Meteorologist Dean Iovino told LevittownNow.com that the region could see rain from the outer bands of the hurricane and locally heavy rain over the weekend and into early next week depending on the path the storm takes after it comes ashore.

“Right now, it looks like the strongest winds will stay well south of our area,” Iovino said.

Recent rains have saturated the ground in Bucks County and fed area waterways, causing some concern for flooding if heavy rains move through.

Taking a swim in the Atlantic Ocean on not-too-far-away beaches in Delaware and New Jersey is not advised over the next few days due to expected rough surf thanks to Hurricane Florence, Iovino explained.

Area emergency management agencies, including in Falls Township, have posted information about the storm and how to prepare on social media.

On Monday night, dozens of Philadelphia-area emergency responders with special training jumped on the road to Columbia, South Carolina, to offer assistance once the storm makes landfall. The responders are organized under Pennsylvania Task Force 1.

A PECO spokesperson said the utility company is monitoring Hurricane Florence closely. They have also secured local contractors to assist in any damage repairs and have placed PECO crews and personnel on standby.