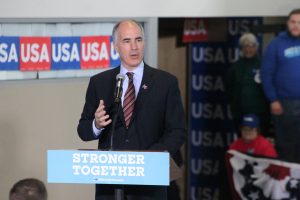 No former or sitting Pennsylvania senator has won the presidency since James Buchanan was elected in 1856. Now, fresh off his third successful Senate campaign, Sen. Bob Casey is giving some early indications that he might be considering trying to break that streak.

Questioned last week by an NBC News reporter whether he was pondering a run for the Democratic nomination in 2020, Casey declined to give a clear yes or no answer.

“We’ll see what happens,” Casey said. ”There are an awful lot of candidates who are going to be running. … It’s going to be a multi-candidate field, and that’s probably the biggest understatement. There’ll be a lot of variety in that field, so we’ll have to see what happens.”

Casey may lack the national profile of many of the most touted candidates, but he pointed to the importance of winning Pennsylvania in the 2020 general election.

“For a Democrat, you have to win Pennsylvania to get elected President,” he told NBC News. “I think you have to couple that with Wisconsin and Michigan and try in Ohio. I think Ohio is even more difficult, but if we win those four states, our presidential candidate definitely wins. I think even if we won two out of four or three out of four, we could probably still win.”

The last sitting or former senator from Pennsylvania to make a serious run at the presidency was former Sen. Rick Santorum, who was the runner-up in the 2012 Republican primaries to nominee Mitt Romney. Santorum was briefly a candidate in 2016 but dropped out shortly after the Iowa Caucuses.

If Casey were to claim the Democratic nomination, he might already have a firm idea of what sort of campaign attacks he’d face from President Donald Trump. During the just-completed Senate election, Trump campaigned in Pennsylvania on behalf of U.S. Rep. Lou Barletta, who was challenging Casey. 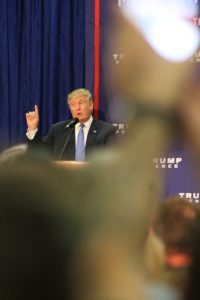 The president, in a campaign rally in August, painted a picture of Casey as an inconsequential member of the Senate whom he hardly knew. Trump said he had a fondness for Casey’s late father, a former Pennsylvania governor, but insisted that the son was just another automatic liberal vote, dubbing the senator “Sleepin’ Bob.”

“Bob Casey was joining President Obama and his horrible tax on our clean coal industry,” Trump said during the rally. “Bob Casey was making it absolutely impossible for the miners.”

“His father was a good man,” Trump continued later in the rally. “Knew him a little bit. But we’re dealing with a totally different person. … He will do whatever [Senate Minority Leader Chuck] Schumer, [House Minority Leader Nancy] Pelosi … and [Rep. Maxine Waters] tells him to do.”

Casey was a bit more reticent during the campaign about attacking the president, evidently cognizant that Trump had won Pennsylvania during the 2016 general election and not wanting to alienate those who had voted for him. He even went as far as to tout his ability to work with the president on some issues.

“We have legislation that I have passed that President Trump signed into law,” Casey said during the Oct. 26 debate against Barletta. “My grand families bill that helped grandparents who are raising a child because of the opioid crisis. That online tool is now the law of the land. Secondly, the career and technical education bill that I did with [Sen.] Mike Enzi of Wyoming. That’s signed into law. So if it’s just bills signed into law in the recent past by President Trump, I’ll win that battle.”