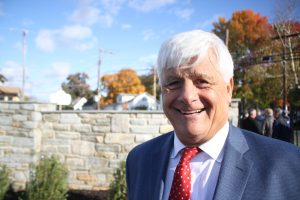 With an advantage of just 74 votes, Incumbent Republican State Sen. Tommy Tomlinson was declared the winner over State Rep. Tina Davis, his Democratic challenger, on Friday.

Tomlinson, who has declared himself the winner since the hours after the November 6 election, beat past Davis in the extremely close race that involved more than 108,000 votes cast in the Sixth Senate District.

Certified vote counts released by the Bucks County Board of Elections on Friday afternoon showed Tomlinson with 54,382 votes and Davis with 54,308.

Ryan Skoczylas, Tomlinson’s campaign manager, told NewtownPANow.com earlier this week that the election proved that every single vote counts. He also thanked voters for their support.

Although Tomlinson has been declared the winner, Davis has not yet conceded and plans to file a lawsuit relating to absentee ballots that were not counted.

Davis’ campaign’s legal filing will ask a judge to allow elections officials to count roughly 200 absentee ballots that came in past November 2 deadline. The lawsuit follows a similar one filed this week by the American Civil Liberties Union of Pennsylvania.

Davis’ argument has to do with Pennsylvania’s absentee ballot deadline, which is the earliest in the country. Ballots are provided in the final days of October were to be sent back the Friday before election day but delays caused roughly 200 to come in late.

Both campaigns have said they have no worry that the previously tallied votes were mishandled, and both sides believe Bucks County officials ensured the integrity of the vote count.

No matter the outcome of the final count, Davis will still have a job as a legislator. Davis won her current state representative seat against Republican Anthony Sposato. In Pennsylvania, candidates can run for two seats but only take one seat.