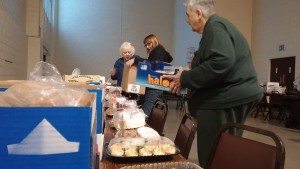 When it comes to the two main ways to support charity – either giving money or donating one’s time – Pennsylvania residents have largely gone the route of volunteering directly, according to a new report.

In fact, the trend of volunteerism is so strong in Pennsylvania, according to financial analysis firm WalletHub, that the state is the 11th most-charitable of all U.S. states despite being only 41st in share of income donated.

WalletHub collected data from many different categories from sources such as the U.S. Census Bureau and Gallup to compile its report, 2018’s Most Charitable States. The report was released Tuesday, timed to coincide with the annual “Giving Tuesday” observance on which donations to nonprofits are encouraged.

“Not everyone is equally selfless,” WalletHub’s Adam McCann wrote. “In the spirit of inspiring altruism, WalletHub determined the most charitable of the 50 states by comparing them across 18 key indicators of charitable behavior. Our data set ranges from volunteer rate to share of income donated to share of sheltered homeless.”

The top state in WalletHub’s rankings was Minnesota, while coming in 50th was Nevada. Pennsylvania was part of a pattern of Northeast states generally doing well, as neighbors New York (third overall), Maryland (fourth) and Ohio (13th) were in the same general vicinity. Further down were New Jersey (18th), Delaware (24th) and West Virginia (35th).

There were a number of subcategories where Pennsylvania scored highly, including:

While the “share of income donated” measure was in the bottom 10 in the nation at 1.08 percent, that was somewhat offset by Pennsylvania’s 16th place ranking in volunteer rate, at 29.7 percent.

WalletHub reached out to Jennifer Siebenthaler, associate dean for undergraduate affairs at the University of Kentucky’s Gatton College of Business and Economics, to talk about the changing trends in charitable giving. According to Siebenthaler, traditionally effective fundraising tactics might not be working as well as they used to.

“Younger donors give in different ways, in response to different calls to action, and with different expectations than generations of the past,” she said. “Charities are cognizant of the changes in the newer generations of donors, but many are currently reliant on generations that respond to the traditional support letter and calls for monthly giving.”

Siebenthaler warned, though, that as charities try out new tactics to try to attract a new generation of donors, it’s important not to alienate the baby boomers who still provide the majority of charitable giving.