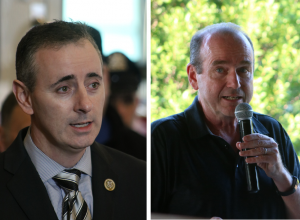 That was what Republican Congressman Brian Fitzpatrick’s response when asked how he won a second term in the face of a “blue wave.”

The Levittown native’s comment touches a raw nerve of political analysis. A phenomenon as complex as an election result is difficult to accurately and sufficiently explain, so cliches and assumptions almost inevitably fill the void.

For years the rap on this Bucks County-based district is that the Fitzpatrick machine is a juggernaut that repeatedly spoils the best laid plans of Democrats. So just how true is that maxim? Let’s dig deep into the results, as well as the campaign, to examine what happened and what it can tell us about the future. 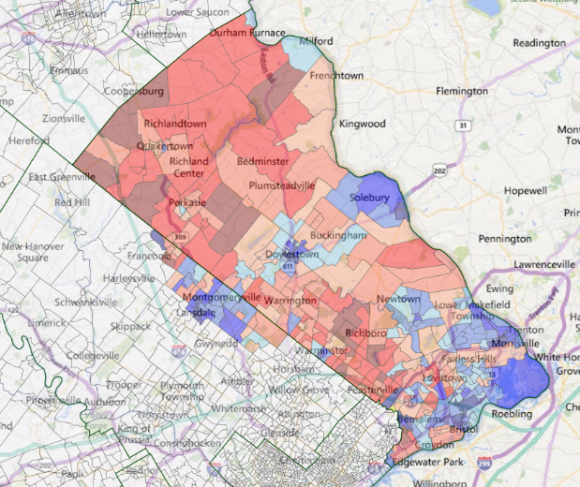 A night that brought Democrats an estimated net gain of forty seats nationwide, including four in the commonwealth alone, saw the party still fall short of unseating Rep. Fitzpatrick.

Wallace underperformed Hillary Clinton’s numbers in the district. In fact, it was one of only three of the twenty-five Clinton districts represented by GOP Reps that the Dems failed to flip (NY-24 and TX-23 were the others).

This indicates that many Bucks residents marked Wolf-Casey-Fitzpatrick ballots. Which brings us to a closer look at the Democratic Party’s First Congressional District nominee.

“Me run?” Scott Wallace asks out loud less than thirty seconds into his campaign announcement video.

The selection of Wallace, a philanthropist who lived the vast majority of his life outside of Bucks County, is an example of a perpetual problem for the local Democratic Party.

Intimidated by the reputation of the Fitzpatrick political machine, Bucks County’s elected Democrats fear a loss and inevitably pass on the race. The party is then forced to pick an outsider. This outsider is then resented for their supposedly foreign ways and is unable to convince enough voters to back them. It’s a quintessential self-fulfilling prophecy.

For example, from 2004 through 2018 Mike and Brian Fitzpatrick have faced: an activist, an Iraq War vet, an attorney, another Iraq War vet, a state representative and a philanthropist.

As a result, the Fitzpatrick brothers have only faced one experienced local pol, when Steve Santarsiero went against Brian in 2016. In that case Fitzpatrick paradoxically still held the advantage, because he could run as the change candidate in an anti-establishment year against a Harrisburg lawmaker.

Nonetheless, the Fitzpatrick clan did suffer one Congressional defeat to Iraq war veteran Patrick Murphy in the 2006 Democratic wave (Mike struck back in the “red tide” of 2010). So, the reasoning went, if 2018 became another wave perhaps it wouldn’t matter that the party was lining up behind an unknown transplant.

That must’ve been what Wallace was thinking. After urging Bucks County Commissioner Diane Marseglia to run, she instead convinced him and declared her support in that inaugural video.

With such connections, and family wealth that provided an unlimited warchest, the party overwhelmingly favored Wallace. With their backing, he easily dispatched his main primary competitor, another recent transplant and Air Force vet Rachel Reddick.

The Perception of Scott Wallace

That’s when the trouble for Scott Wallace began.

Fitzpatrick and the national Republican Party had a few different avenues to choose from when they mapped out their attack plan. For instance, they could follow Reddick’s path and go after him for living in South Africa and being a multimillionaire.

Instead they went with a much cannier angle. They tracked the donations of The Wallace Global Fund, the family charity which Scott ran for a time, and highlighted any and every controversial stance taken by a recipient.

Among the most prominent attacks concerned donations to groups advocating a boycott of Israel (Bucks and Montgomery counties are home to a significant number of Jewish constituents) and to the syndicated TV show “Democracy Now!” which interviewed convicted cop killer Mumia Abu-Jamal.

This line of attack was so effective because people knew little about Scott Wallace. In fact, the only thing most did know was that he was Henry Wallace’s grandson. While most wouldn’t remember the former Vice President, national observers recall his poorly conceived efforts to reach out to a rising Soviet Union early in the Cold War and his quixotic 1948 presidential campaign. This is important because since the popular consensus perception of the elder Wallace was of a far-left loser, this point of view colored how they saw his grandson.

Most prominent among them was the Cook Political Report’s Dave Wasserman. The most knowledgeable and respected chronicler of House races gave a blistering assessment of Wallace in July. With that, the conventional wisdom was set: Wallace was a poor candidate and Democrats had blown a major pick-up opportunity.

Yet that was far from the end of it. Instead of being a firebrand, Wallace was a mild-mannered campaigner who never fell flat on his face. His deep pockets also allowed him to counter Fitzpatrick’s attacks and hammer the incumbent on taxes, health care and President Donald Trump.

All the while, Wallace remained competitive in the polls. House races generally are subjected to few public surveys, but thanks to the efforts of groups like Monmouth University we can surmised that Fitzpatrick held a razor-thin lead throughout the summer and into the fall.

There are several indications, however, that Wallace actually captured the lead at some point in October. A New York Times/Siena poll made waves when it showed the Democrat ahead 50 percent to 43 percent. While the Times’ Nate Cohn was concerned the methodology may have been off, this October surge for Wallace was seemingly confirmed by an internal GOP poll of five toss-up races that also had Fitzpatrick done four points.

So what happened? Well, the Congressman was right, it’s hard to say.

Wallace did make one major stumble when he muttered an expletive during a debate. On the other hand, the Fitzpatrick camp somewhat bungled the opportunity. They falsely asserted that it was directed at the Congressman himself and only obliquely brought it up at the final debate.

They also went all-in with their attacks on Wallace, the most prominent of which focused on a mysterious soundbite where the Democrat said that dogs were smarter than police officers.

By the final weekend, when the New York Times/Siena went back out into the field, they found Fitzpatrick with a one-point advantage.

In the aftermath, pundits blamed Wallace for being a terrible candidate and blowing the race.

Was it that simple? I wanted to find out, so I dug into the numbers to compare the 2018 contest to Fitzpatrick’s 2016 battle with Steve Santarsiero.

I was able to map out Wallace’s performance against Santarsiero’s by precinct. Note: I could only do this for Bucks County as the Montgomery County portion of the district changed after the court-ordered redistricting. 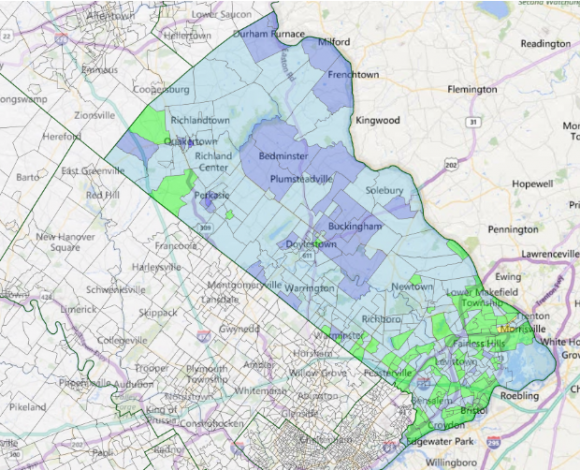 Now since Wallace lost by just over a point and a half, and Santarsiero fell a bit under nine points short, you expect a heavily blue map. In many ways, it is. Wallace was much stronger in Central and Upper Bucks, particularly his hometown of Buckingham and cities like Perkasie, Riegelsville and Quakertown.

It was Lower Bucks, however, where Wallace lost ground. Lower Makefield is Santarsiero’s home territory so it makes sense to see green there. As I wrote about months ago, Levittown’s own Brian Fitzpatrick continued to show strength there, although there were some spots where Wallace managed to improved the margin. While the Democrats still need to do better there, Levittown ended up being more of a mixed bag than I anticipated.

Where Wallace really struggled was in Southwest Bucks, places like Bensalem and Croydon. His largest losses, though, occurred in normally heavily-Democratic Bristol Borough. For example, the only two precincts where Santarsiero ran more than five points ahead of Wallace where both located there.

The Complex Politics of Lower Bucks

It seems like everytime I examine Lower Bucks, where I was born and raised, for one of these pieces I find a new illuminating map. Last year, it was a map that showed the median income in the area is far less than in the rest of the county. This time I stumbled on a New York Times report on how one’s childhood neighborhood affects one’s future income. 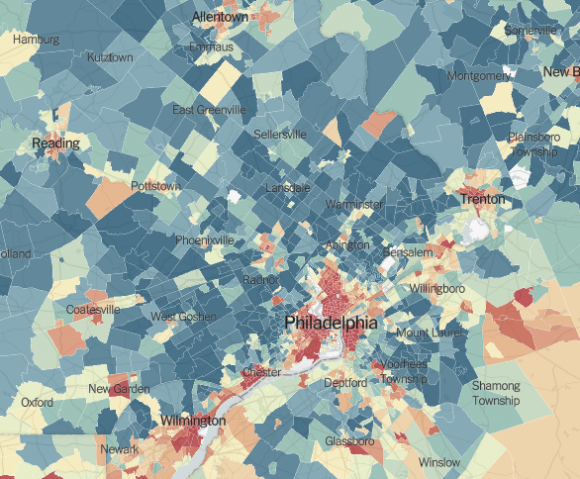 A color graded scale running from high income blue to low income red. Created for the New York Times by the Opportunity Atlas.

As you can see the southernmost strip of Bucks faces the hardest struggle and this phenomenon extends in part from Trenton through Philly and southern Delco, all the way to Wilmington.

Lessons for 2020 and Beyond

For the Democrats, all of the above only reinforces the lesson that they need to find a local official to run, preferably one from Lower Bucks.

It should also show them not to write-off this seat, even if they have concerns about their candidate. By and large, national Democrats stayed away from this contest with a few key exceptions.

Former President Barack Obama gathered all the regional candidates together, including Wallace, for a rally in Philly in September. Gov. Wolf and Sen. Casey also stopped by on the Saturday before the election in Chalfont, a town that actually flipped in favor of Wallace.

A week out Patrick Murphy, a Bristol resident, teamed up with fellow ex-Congressman Peter Kostmayer for an event at the historic King George Inn along the Delaware River in Bristol Borough. Several national correspondents attended the gathering, but it seems to have been too little, too late for Wallace.

The Democratic nominee may have benefited from additional national help. For instance, former Vice President Joe Biden never made an appearance. He was even in Pennsylvania on the final weekend stumping in Scranton for Matt Cartwright. Still, for whatever reason, Biden decided to end his swing with a stop for George Scott in Harrisburg instead. Blue-collar Bristol seems like a more natural fit than the white-collar Capital for a guy who calls himself “middle-class Joe”. Alas, we’ll never know if it would’ve made a difference.

As for Fitzpatrick, it’d be easy to rest on the laurels of this victory. After all, he did what his brother could not and withstood a blue wave. Nevertheless, there are some troubling signs for him trembling underneath the surface.

He had the major endorsements, the name recognition and an outmatched opponent but only won by a point and a half. Perhaps those advantages are masking his weaknesses.

Brian Fitzpatrick has an easy manner, excellent memory and a passion for non-partisanship. The problem is it’s not clear he really wants to be a politician. One gets the sense that familial obligation drives him more than he would ever let on. This matters because 99 times out of 100, election victories go to the man or woman who deep down just truly wants it more.

Finally, there was 2018’s massive turnout numbers. Usually midterms see only the opposition party show up and overall participation plummets. Yet this year turnout approached presidential levels, suggesting the 2018 and 2020 electorates may not be too different.

The biggest worry for Fitzpatrick and the GOP is that 2018 wasn’t a high-water mark for Democrats but rather a new floor. If it’s the latter, then another better-known and/or highly-skilled candidate can put up a fight that will make the incumbent reminisce about how easy he had it in 2018.