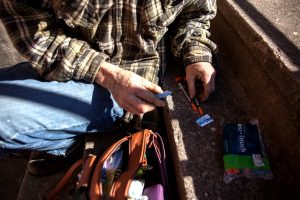 Daryl, who has had an opioid use disorder for more than a decade, prepares to inject Suboxone he bought on the street. He said it helped him remember what being normal felt like.
Credit: Seth Herald/WFYI

A recent study by medical professionals has shown that progress is being made to treat the opioid epidemic in Pennsylvania.

The analysis showed that Pennsylvania is making progressing in increasing access to “high-quality, evidence-based care” for substance use disorder, providing care to patients with pain, and opening up access to opioid overdose reversal drug naloxone.

The study that reviewed data and policies and included discussions with policymakers showed that actions the Keystone State has taken were working to fight the crisis.

Medical professionals lauded the efforts to remove administrative barriers to improve access to medication-assisted treatment and oversight of Medicaid patients who may benefit from treatments that are alternatives to opioid prescriptions.

The November agreement between the state’s seven largest insurers and Gov. Tom Wolf’s administration to remove prior authorization requirements for medication-assisted treatment was noted as an achievement.

The analysis found emergency rooms and law enforcement could better link efforts to improve access to opioid treatment, policies could be improved to widen access to non-opioid pain alternatives, and that there could be further efforts to get naloxone into the hands of those at risk of overdosing.

A report earlier this year from the Drug Enforcement Administration’s Philadelphia Division found that 5,456 drug-related overdose deaths in Pennsylvania in 2017. The number showed a 64 percent increase in overdose deaths from 2015 to 2017.

“There is long way to go to fully end the epidemic in Pennsylvania and across the nation, but it’s clear that Pennsylvania’s policymakers are employing multiple strategies that are showing promise,” said Dr. Patrice A. Harris, president-elect and chair of the American Medical Association opioid task force.

“As a former insurance commissioner, we wanted to be sure that the recommendations contained in this report are practical and reasonable but also ambitious and commensurate with the challenge,” said Joel Ario, a managing director at Manatt Health Strategies. “Now that so many states have enacted policies designed to reverse the opioid epidemic, it’s critical that in-depth analysis of those policies be made available to policy makers.”

Wolf said he was pleased by the progress.

Last week, the governor renewed the ongoing opioid disaster declaration for 90 additional days and noted it allowed for several initiatives in the fight against the opioid epidemic to continue.

Since the declaration began in January 2018, the state has operated an Opioid Operational Command Center at the Pennsylvania Emergency Management Agency. The command center has increased coordination among state police, corrections officials, Commission on Crime and Delinquency, Department of Health and Department of Drug and Alcohol Programs.

“It is critical that we keep building on our efforts at prevention, rescue, and treatment by extending the disaster declaration for another 90 days and urging the General Assembly to again take up a public health emergency when they return,” Wolf said. “We must work to ensure that my administration and local partners can continue to use every tool available to them to help people and communities in need.”

Earlier this month, more than 500 doses of naxolone were provided at no cost to Bucks Countians at three locations throughout the area. The county and law enforcement have also held numerous information sessions to educate the public over the past few years.

The state operates a round-the-clock helpline for those dealing with drug and alcohol problems at 1-800-662-HELP.