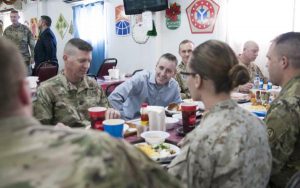 The Republican congressman’s office announced the visit to “various undisclosed locations” in the Middle East on Christmas Eve.

Fitzpatrick’s trip will have him serve Christmas dinner to the troops, spend time with Pennsylvania troops deployed to the region, and allow him to talk to military officials and receive classified briefings on the continuing operations  in CENTCOM’s area of responsibility, which includes 4 million-square-miles in the Middle East.

I just had a long and productive call with President @RT_Erdogan of Turkey. We discussed ISIS, our mutual involvement in Syria, & the slow & highly coordinated pullout of U.S. troops from the area. After many years they are coming home. We also discussed heavily expanded Trade. 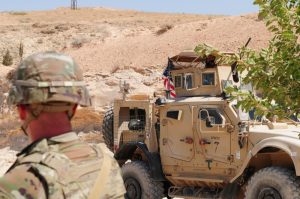 An American soldier stands watch near a tactical vehicle during a coordinated patrol outside Manbij, Syria on August 19.
Credit: Sgt. Nicole Paese/U.S. Army

The congressman could learn more on the military’s operations in Syria, which Republican President Donald Trump abruptly announced last week that he would pull American troops out of. Fitzpatrick said last week that he was “greatly concerned” that Trump planned to eliminate the American military presence in Syria.

“Our continued presence in Syria is critical to defeat ISIS, push back against Russian and Iranian influence, and put the Assad regime on notice,” he said.