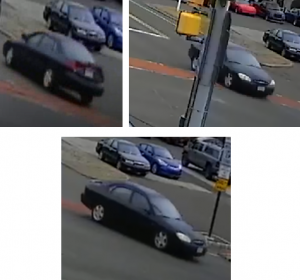 The first suspect – a 5-foot-8 white man who wore a tan windbreaker with a black stripe on the sides, polarized sunglasses, a nylon camo face mask, dark jeans, and gray shoes with a white sole – walked into the First National Bank and Trust Company of Newtown branch at 1121 General Washington Memorial Boulevard around 9:48 a.m. on Thursday, December 6. He  displayed a gun and demanded cash from the teller, police said.

On Friday, police announced additional surveillance footage reviewed shows a second suspect in what appeared to be an early 2000s Ford Taurus. The suspect in the car waited nearby to pick up the robber. The car, which displayed a front plate and had a spoiler, was last seen headed southbound on Taylorsville Road towards I-295 in Lower Makefield.

Anyone with information on the robbery has been asked to contact Detective Jeff Jumper at 215-968-3020 or jjumper@uppermakefield.org.