The Democratic primary race for the Eighth Congressional District between Shaughnessy Naughton and State Rep. Steve Santarsiero has turned ugly in its final weeks.

Technology entrepreneur Det Ansinn, a Santarsiero supporter and also president of Doylestown Borough Council, filed a complaint this month with the Federal Election Commission stating that the science, technology, engineering and mathematics-focused political action committee (STEM and PAC) coordinated with the Naughton campaign.

Independent PACs and campaigns are not legally allowed to directly coordinate during an election cycle.

Ansinn, an advisor for the 314 PAC, first posted about the PAC possible coordination after a mailer attacking Santarsiero was sent out. The mailer – in addition to two others sent out – stated it was from the PAC. 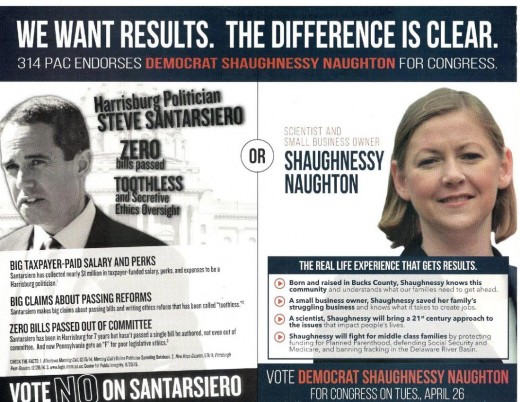 One of the mailers.

The issue comes down to whether campaign advisor Josh Morrow, who is engaged to marry Naughton, violated federal election law by receiving a consulting fee of $20,000 from the 314 PAC in late 2015 and another $7,550 in the first part of 2016. Documents filed with the Federal Election Commission also show Morrow was paid $14,500 for consulting work provided to the Naughton campaign. 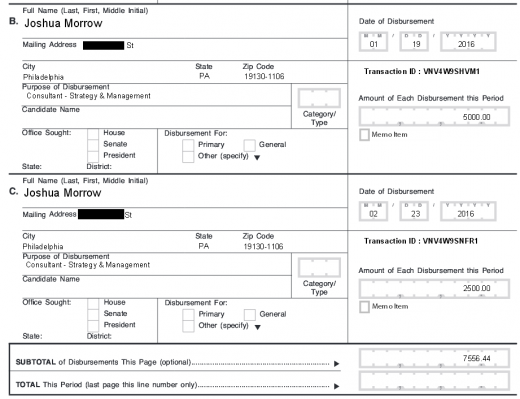 A spokesperson for the PAC told the Bucks County Courier Times recently that Morrow worked as a “strategist who helped with our assessment of candidates and put together dossiers.”

Naughton, a small business person and scientist from Point Pleasant in the upper end of the county, started the 314 PAC after her loss to Kevin Strouse in the 2014 Democratic congressional primary. A press release from September 2014 notes the 314 PAC is a “political action committee that will recruit, train, and elect Democratic candidates with backgrounds in science, technology, engineering, and mathematics.”

314 PAC had been dormant for a while. No conference calls, emails, or meetings for months. So, you can imagine my surprise, and the surprise of other advisors, to see this hit piece land in 8th District mailboxes… including my own, today.

As you can see by the attachment, it’s not some substantive issue piece about science, the environment, or other STEM interest. It doesn’t even mention a STEM candidate. It is a direct nasty assault towards against Steve Santarsiero. It’s the kind of crass mailer that turns people off from politics and the antithesis of why myself, and other advisors, got involved with 314 PAC in the first place.

So, why/how does the ugly piece exist? As far as I can tell, there was no process here. We weren’t asked for an opinion. Heck, Shaughnessy Naughton didn’t even make the list of our endorsed candidates — I have attached them as well.

I still haven’t been given an answer. In fact, everyone that I know who is/was involved with 314 PAC is just as surprised as me. I feel like my name, and the names of other advisors, are being used to lend credibility towards this nonsense.

In a statement emailed to LevittownNow.com, Santarsiero raised issue with the content of the mailers and called them a “desperate new low.”

Bucks County Democratic Party boss John Cordisco sent a letter to reporters this week that stated he found the ” clear and documented staffing overlap between the Naughton campaign and 314PAC troubling; the most disturbing detail is that Naughton personally founded this PAC before the election with one now-obvious intention: to smear Steve Santarsiero and distort his record. ”

A fundraising email from the 314 PAC.

Erik Polyak, Naughton’s campaign manager, said Naughton is no longer part of the PAC and stepped down before she announced her run for congress. In a phone interview, he called the complaint nothing more than a “publicity stunt.” He added that there were no laws violated.

Dr. Ingrid Oakley-Girvan is currently leading the PAC and stepped up when Naughton resigned.

The issue is likely to be mentioned by at least one of the candidates at Thursday’s debate in Bristol Township.