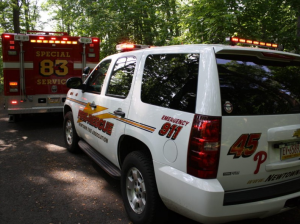 Volunteer firefighters from Newtown and Northampton worked together Saturday afternoon to rescue a teenage girl who fell down a cliff at Tyler State Park.

The 17-year-old girl fell down a cliff on the Northampton side of the park and landed near the Neshaminy Creek. Firefighters from the Newtown Fire Association and Northampton Fire Company were dispatched along with medics at 4:28 p.m. and rushed to the scene.

Newtown Deputy Chief Brian Gerhard said the two fire companies worked seamlessly together to rescue the teenager and get her to St. Mary Medical Center in Middletown for treatment for non-life-threatening but serious injuries.

Firefighters from Newtown worked with their peers in Northampton to repel to the scene and launched a boat to transport the injured teenager to an ambulance waiting on the Newtown side of the creek.

Firefighters train throughout the year for cliff rescues at the park.