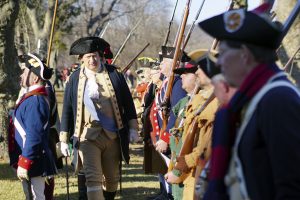 Despite the fact the reenactors did not cross the waterway much like General George Washington and his more than 2,000 troops did 241 Christmases ago, Washington Crossing Historic Park continued their commemoration with demonstrations and other activities.

“We were advised by the (marine patrol) out in the boats that they didn’t think it was safe to cross,” Friends of Washington Crossing Historic Park spokesman Andy Smith told the Associated Press.

The crossing cancellation came as winds gusted as high as 40 mph around Lower Bucks County.

This year’s crossing was threatened by low river levels and saved at the last minute by nonprofit Philadelphia Waterborne, which teaches city school kids to make boats. The nonprofit’s boats were to be used in place of the traditional Durham boats that need more water than was in the river.

At the dress rehearsal earlier this month, the low river level caused that crossing to be cancelled.