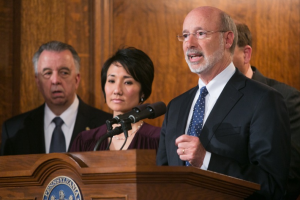 Pennsylvania has less onerous occupational licensing regulations than many other states, according to a new national study, but researchers say it has a lot of work ahead to ensure residents are not being barred from their preferred profession.

A study released last month by the Virginia-based Institute for Justice found that Pennsylvania rated 50th in terms of the overall burdens of its licensing laws. The study looked at more than 100 lower-income occupations and ranked the 50 states and the District of Columbia.

Pennsylvania, however, often licenses occupations that are not licensed in other states, such as upholsterers, taxidermists and auctioneers, the study found.

Efforts to reform such licensing laws in different states are not just limited to conservatives concerned about regulations, according to one of the authors of the Institute for Justice study, Dr. Dick Carpenter. Indeed, reform efforts have been bipartisan, Carpenter said.

“The Little Hoover Commission in California came out in support of reform of occupational licensing,” he told Watchdog.org, adding that the Obama administration also published a report that expressed skepticism about the benefits of licensing.

Earlier this year, Pennsylvania Gov. Tom Wolf, a Democrat, signed an executive order to review the state’s process of professional licensing to ensure that it was not overly burdening residents, especially low-income Pennsylvanians.

“Overly burdensome requirements and fees can block some workers – especially minorities or spouses in military families who move frequently – from starting a career and supporting their families,” Wolf said in a prepared statement.

An estimated one-fifth of workers in Pennsylvania require licenses to do their jobs, according to the Governor’s Office, which reported that the percentage of those requiring such licenses has ballooned since the 1950s.

Jared Meyer, a senior research fellow at the nonprofit Foundation for Government Accountability, recently authored an article on Forbes.com that examined the case of Sally Ladd, a New Jersey resident who provides management services for owners of vacation properties in Pennsylvania’s Pocono Mountains. The Pennsylvania Bureau of Professional and Occupational Affairs notified Ladd that she was engaged in real estate practices that violated state law and that she would need a broker’s license to continue.

The rules to obtain such a license in Pennsylvania include 300 hours of instruction and spending three years working for an established broker. The Institute for Justice has filed a lawsuit on Ladd’s behalf, arguing that applying the standards of real estate brokers to the vacation rental market is burdensome and outdated.

“Outside of an outright ban, occupational licensing is the strictest form of regulation that government can apply to a profession,” Meyer told Watchdog.org in an email. “The only justification for this form of stringent regulation is protecting the public. Everything from bonding and registration to voluntary certification and inspections allows more consumer choice and work opportunities than licensing.”

New information technologies and the advance of peer-to-peer communications allow consumers to more easily check the reliability, cost and quality of services, reducing the need for government licensing, he said.

“Consumers have little need for licensing agencies in many sectors of the economy in the age of Google Reviews, Yelp! and various social media platforms,” Meyer said.

Wolf’s decision to take a closer look at Pennsylvania’s licensing requirements is a positive development, he said, but it is still far too early in the process to know if it will be effective. Special interests determined to reduce outside competition for certain professions will fight to retain the licensing barriers, according to Meyer.

“In 2015, the Supreme Court found that these special-interest groups often control licensing boards,” he said. “This is why the state legislature may still have to act to force the boards to follow the governor’s lead.”

Dr. Edward Timmons, director of the Center for the Study of Occupational Regulations at St. Francis University in Loretto, Penn., said the state’s licensing rules for health care occupations are also problematic.

“Nurse practitioners [in Pennsylvania] don’t have the same freedom to practice to the full extent of their training compared to other states,” Timmons told Watchdog.org, adding that they have to enter into agreements with doctors to practice in their field. “In Maryland, nurse practitioners have no such restrictions.”

Timmons suspects that onerous licensing rules can drive up the unemployment rate in states, although such a phenomenon would be difficult to measure precisely. In research he has done, however, this seems to be the case.

“As states added more licensed occupations … there seemed to be less economic mobility in those states,” he said.

In those states with higher licensing standards, children have often not been able to exceed their parents’ successes in the workplace, according to Timmons.

Another problem is that the licensing of occupations has a tendency not to be replaced or scaled back, he said.

“Historically, there has been hesitation on the part of legislatures to reconsider or think about how technology might be affecting the effectiveness of licensing laws,” Timmons said.