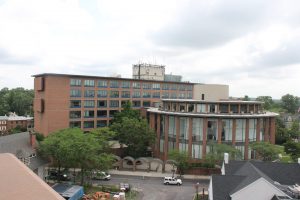 A view of the county and administrative offices in Doylestown.
Credit: Tom Sofield/NewtownPANow.com

The Bucks County Commissioners voted to raise taxes to fill a budget gap.

The governing body voted to raise taxes by 5.4 percent from 23.2 mills to 24.45 mills, an increase of about $45 for the average Bucks County homeowner.The increase marks the first one since the 2012 budget.

County officials said multiple factors led to the increase that will fill the roughly $10 million budget gap, including the opioid crisis that is impacting the country. As the opioid crisis has grown, the county has seen an increase in the prison population, children and youth casework, drug cases moving through the courts, overdose deaths handled by the coroner’s office, law enforcement investigations and other government agencies. Officials have said previously that the opioid epidemic impacts nearly every facet of the county government.

The county has seen opioid arrests up 30 percent in two years, child abuse investigations up 95 percent and autopsies performed up 141 percent. Since 2012, there has been a 25 percent increase in the number of children in foster care due to substance abuse.

The budget gap started at more than $40 million in summer but was whittled down throughout the planning process.

“None of us like to do this but sometimes it becomes necessary,” Commissioners Chairman Charley Martin said of the tax increase.

Martin noted this is only the second county tax increase in 12 years.

Commissioner Rob Loughery explained that the county worked to cut down costs and has managed to keep spending in line over years through their budgeting process.

“It’s the things we can’t control that are really driving this budget,” Loughery said.

“It’s what we have to do. There’s an epidemic in this county,” Commissioner Diane Ellis-Marseglia said, adding the corrections and children and youth services are nearly fully funded by real estate taxes.

In addition, the Bucks County Agricultural Land Preservation purchased the county-only agricultural conservation easement for the Patterson Farm in Lower Makefield for $1, plus settlement costs. The active farm will see 183.33 acres saved by the county.

“This is a signature farm for lower Bucks County,” Bucks County Agricultural Land Preservation Director Rich Harvey said. “We are very happy to get it.”