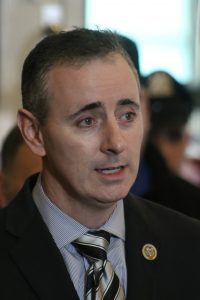 Congressman Brian Fitzpatrick is one of two Republican lawmakers introducing a so-called “carbon tax” bill that he described as “market based.”

What’s notable is that the bill would mark one of the first conservative proposals calling for a carbon tax. Previously, carbon tax proposals were mostly floated by Democrats and have received varying levels of support in Washington D.C.

If passed, the legislation will begin putting a $24 tax per metric ton on industrial carbon-dioxide emissions starting in 2020. Over the following years, the tax amount would increase. The majority of the tax revenue raised would go toward funding infrastructure projects through an estimated $285 billion for the Highway Trust Fund and an addition $18 billion would go to the Airways Trust Fund. It would also cut the gasoline tax and aviation fuel tax while finalizing and enforcing Clean Air Act regulations on greenhouse gas emissions.

An analysis of the bill conducted by Columbia University estimated it would reduce carbon emissions by 27 to 32 percent by 2025 and 30 to 40 percent by 2030.

“The Market Choice Act is an important step to reduce carbon emissions that are contributing to atmospheric change, rising sea levels, and more intense natural disasters. This legislation would modernize America’s infrastructure by sparking investment in our roads, bridges, and energy grid while eliminating a regressive gas tax,” Fitzpatrick said in a statement.

“This bill captures the political energy of the moment by not only seeking to drastically reduce carbon emissions, but also funding much-needed infrastructure modernization in our country. Despite those invested in the depressing paradigm of bipolar politics who will dismiss this effort summarily, I look forward to the important debate this proposal will spark, and I encourage all my colleagues to give it serious consideration and offer constructive criticisms and ideas to move this conversation forward,” Curbelo said in a statement.

Fitzpatrick and Curbelo are both in the House Climate Solutions Caucus.

When asked at an event late last week, Fitzpatrick told a NewtownPANow.com reporter he believes climate change is greatly impacted by human activity, a position he has held over his first term.

Fitzpatrick stands in contrast to Republican President Donald Trump who once claimed climate change was a “hoax” created by the Chinese. The congressman also disagreed when the president pulled out of the multi-nation Paris climate agreement, which called for nations to reduce their greenhouse gas emissions.

The concept of global warming was created by and for the Chinese in order to make U.S. manufacturing non-competitive.

“The Market Choice bill isn’t perfect. But the legislation provides a good starting point for discussion and debate, and includes several features that are key to making a carbon tax successful,” according to a Fortune opinion piece. The commentary also praised the proposal for showing Republicans can get involved in the climate change discussion.

“Although many will be attracted to the infrastructure and economic gains in this bill, the climate benefits should not be ignored. The bill is designed to ensure actual, measurable pollution reductions are achieved through the inclusion of measurable benchmarks and by retaining EPA regulatory authority as a backstop,” The Nature Conservancy said in a statement.

“While the Market Choice Bill marks some progress for federal policy, it pales in comparison to many state-level and local efforts to address greenhouse gas emissions. And it’s not even worth comparing Curbelo’s proposed bill with international efforts, since the U.S. government deliberately excluded itself from global efforts to address climate change,” climate change activist Dr. Emilie Prattico said.

The bill is likely to face an uphill battle in a Republican-controlled Congress, but it has received some support from several companies, including some energy providers.

“We believe that an economy-wide, market-based approach to valuing or pricing carbon, when carefully crafted, can both strengthen our economy and reduce carbon emissions by encouraging technological innovation and stimulating new investments in infrastructure, products, and services. A market-based approach provides companies, such as ours, with much-needed certainty to aid us in making long-term investment decisions that can further mitigate climate-related risks for our companies, supply chains, and the communities in which we live and work,” a letter signed by General Motors, Dow Chemical, National Grid, Sierra Nevada Brewing Company, Lyft, and other companies read.

The companies noted in their letter that they were not endorsing the bill and wanted the discussion to continue.

Scott Wallace, the Democrat running against Fitzpatrick, called the bill “watered down” and declared it was “not going anywhere.”

“We need to commit to renewable energy and reduce our dependence on fossil fuels, we need to reinstate the clean power plan and Paris Agreement, and restore the EPA’s power to regulate climate pollution – none of which will happen with Brian Fitzpatrick and a Republican Congress in power. Brian Fitzpatrick has taken tens of thousands of dollars in campaign contributions from fossil fuel industries. He’s part of the problem, not the solution,” Wallace said.