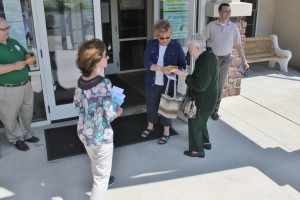 Voters preparing to enter the polling place at the Newtown Township complex in 2016.
Credit: Tom Sofield/NewtownPANow.com

There are 435 Congressional Districts throughout the United States and Bucks County residents have the honor, burden and responsibility of living in one of the 24 that have been considered a toss-up. With control of the House of Representatives projected to be up in the air, it’s exceedingly likely that the party that prevails in the new First Congressional District this November will also be the party that wields the Speaker’s gavel.

In an effort to shed as much light as possible on this critical race, I created precinct-by-precinct maps for both the Republican and Democratic First Congressional District primary contests that took place on May 15. 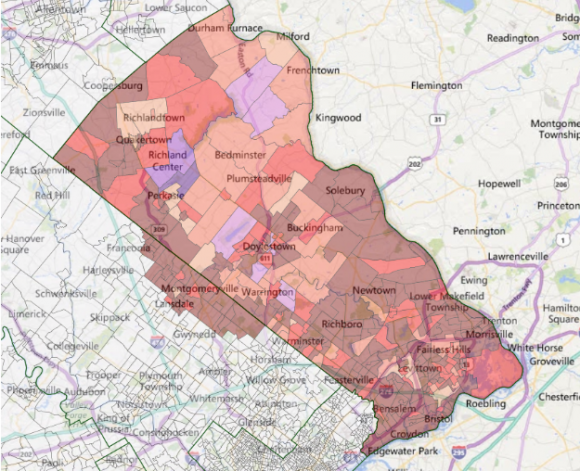 Incumbent Congressman Brian Fitzpatrick easily captured the GOP nomination over Dean Malik 67 percent to 33 percent and while Fitzpatrick prevailed with a safe cushion, he didn’t perform as well he did in 2016 when he captured 78 percent of the primary vote.

Malik can take some solace in that he snatched away a few precincts and did admirably well in parts of Central and Upper Bucks County. 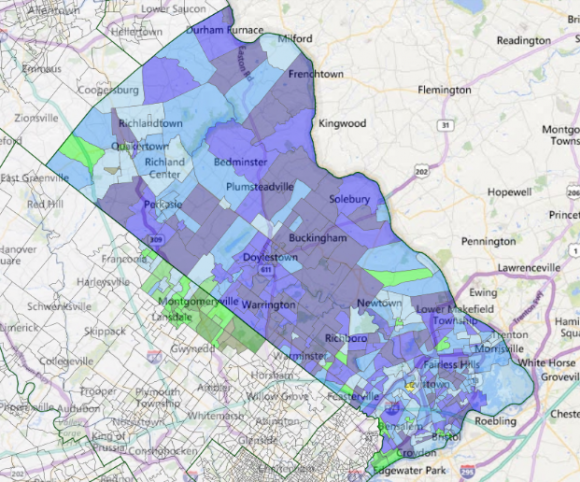 Meanwhile, Scott Wallace won the Democratic nomination with 56.5 percent in a three-way race against Rachel Reddick and Steve Bacher, who each finished with 35.3 percent and 8.2 percent respectively.

Wallace’s support throughout Bucks County was geographically consistent, with Reddick’s precincts spread out in no real particular pattern.

The Trends of the 1st District

Those Montgomery County results should trouble Wallace as his success depends on running up the margins there. As I noted before, under the old Eighth Congressional District lines the Montgomery County section was a boost for the GOP. After the state Supreme Court redrew the lines, however, Democrats now outnumber Republicans in that portion of the county.

Additionally, the importance of that narrow slice of the 1st District is showcased by a recent Philly.com survey of population growth in Delaware Valley.

Montgomery County (including the portion included in the First Congressional District) is growing quite steadily while Bucks County is losing more population than any other Southeastern county. This poses a challenge for Democrats which can best be illustrated by comparing the map above with another one I created.

This graphic breaks down the total turnout from the First Congressional District primaries by precinct in order to examine where the sum of all votes in the GOP contest exceeded those in the Democratic race and vice versa. 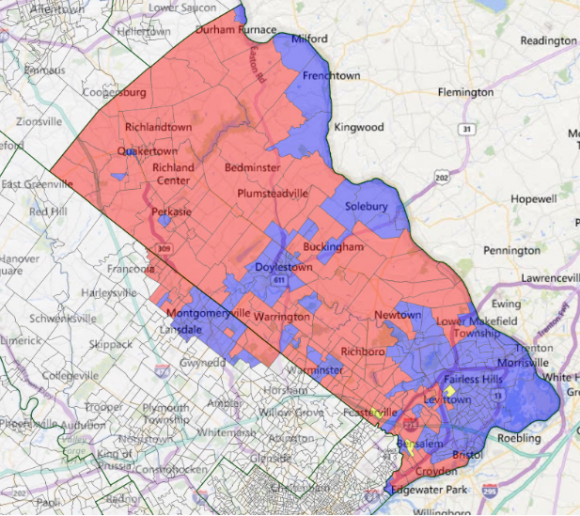 There is a tremendous overlap in terms of Democratic strongholds and areas that are losing population. This is most pronounced in Lower Bucks County, which contains major cities like Bristol, Levittown and Fairless Hills.

I’ve previously examined the erosion Democrats have experienced in Lower Bucks County, as it proved quite costly to them in 2016. It’s likely not a coincidence that this area is also hemorrhaging residents.

Nevertheless, it’s not all doom and gloom for Democrats, in fact far from it. For instance, more Democrats voted in their congressional primary than Republicans (49,014 to 46,861). They also hold a voter registration advantage of 10,947 in the First Congressional District.

While the new Montgomery County borders are a major factor, there’s also been an upsurge in voter registration among Democrats in Bucks County. Last year, the party had just 6,640 more registrants than the GOP. Ten months later, that margin is now D+9,048.

The State of the Race

To illustrate just how vital the First Congressional District race will be to rest of the nation, Monmouth University chose it to be the first contest they surveyed as part of their 2018 series. Conducted from May 31 through June 3, Monmouth found Fitzpatrick with a 49 percent to 42 percent lead among all voters.

While on the surface a good sign for the incumbent, the results actually provide warning signs for him. After all, the Fitzpatricks are practically a political dynasty in Bucks County and Wallace is largely unknown. 53 percent have no opinion on the Democratic nominee while just 25 percent say the same about Brian Fitzpatrick.

Furthermore, Monmouth adjusted the results to fit a historical midterm model and saw Fitzpatrick’s advantage drop to a single point. They project that a major Democratic surge would actually put Wallace ahead 48 percent to 47 percent.

What could account for this? Well President Donald Trump’s approval ratings are underwater, with just 47 percent approving of the job he’s doing against 51 percent who disapprove, according to the latest Rasmussen Reports polling data.

Trump is sure to get more TV time over the coming months than either candidate could possibly buy. We don’t know what actions he’ll take, only that they’ll have a meaningful effect on the midterms.

In the face of all this, the Fitzpatrick campaign will have to try to define and disqualify Scott Wallace in the minds of voters. Wallace, on the other hand, should spend the summer attempting to introduce himself on his own terms.