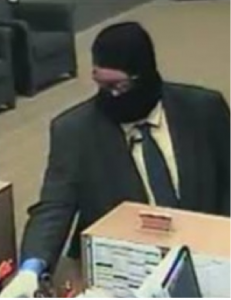 The suspect during the Wrightstown robbery.
Credit: FBI

The so-called “Straw Hat Bandit” has been nabbed, per federal authorities.

The suspect – Richard Boyle, 57, of Plumstead Township – was arrested by special agents from the FBI Thursday morning.

The arrest came a day after a federal grand jury returned an indictment charging Boyle with 11 counts of bank robbery, 10 counts of using or carrying a firearm during the commission of those bank robberies, and 10 counts of money laundering, according to the U.S. Attorney’s Office in Philadelphia.

During his 11-bank robbery spree that hit branches in Bucks and Montgomery counties between 2012 and 2016, Boyle made off with $495,686 in cash. He is also accused of laundering a portion of the stolen money through his aerial photography business, the indictment stated.

A law enforcement source confirmed to NewtownPANow.com that Boyle was previously convicted of taking more than $100,000 from eight banks between 2007 and 2008. That bank robbery spree took place over Bucks, Montgomery, Lehigh and Northampton counties.

On September 28, 2012, Boyle alleged walked into the Wrightstown branch of what was then First Federal of Bucks County at 803 Park Avenue and robbed the bank. Several months later on January 1, 2013, the FBI believes the same suspect walked into the Well Fargo Bank at 706 Stony Hill Road in Lower Makefield and knocked over the branch.

In many of his robberies, Boyle pulled out a black semi-automatic handgun and verbally demanded money from tellers during the robberies, FBI special agents said in 2016.

Federal Aviation Administration records list Boyle as a drone pilot who has his licence. The website related to his business is currently off-line.

Boyle is expected to be arraigned in federal court later Thursday.