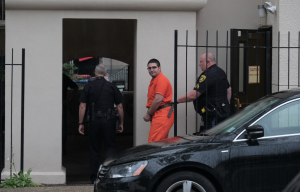 Bensalem resident Cosmo DiNardo will spend the rest of his life in prison for his leading role in the July 2017 slayings of Dean Finocchiaro, 19, of Middletown; Thomas Meo, 21, of Plumstead Township; and Mark Sturgis, 22, of Pennsburg, Montgomery County. DiNardo also killed Jimi Patrick, 19, of Newtown Township.

DiNardo, 21, appeared in court in Doylestown on Wednesday morning for a pre-trial hearing. The courtroom was packed with the families of the victims, DiNardo’s family, and reporters. At least a dozen sheriff’s deputies were scattered throughout the large courtroom where President County Judge Jeffrey Finley presided.

DiNardo’s lawyers Fortunato Perri and Michael Parlow recommended for DiNardo to be sentenced to four terms of life, one for each murder victim. The judge imposed the sentences and ordered that they would be carried out consecutively.

The attorneys said DiNardo’s plea was entered after two mental health experts came to the conclusion they could not use an insanity defense.

Some of the victim’s families cried during the reading of the facts.

Finocchiaro, Meo, Patrick, and Sturgis were all lured to property owned by DiNardo’s family in Solebury last July. Prosecutors allege that DiNardo and Kratz took part in killing the men.

Shore revealed for the first time that Kratz pulled the trigger and killed Finocchiaro after the three used ATVs to travel the Solebury farm. According to the district attorney’s office summary of facts, Kratz shot Finocchiaro once in the head before DiNardo took the gun and fired again. As they walked away, the men took $200 from Finocchiaro’s body.

It was also revealed that Patrick, who was killed first, was buried six feet below the ground in a remote part of the farm.

Weapons used in the homicides were recovered, and DiNardo and Kratz tried to conceal their involvement by scrubbing a vehicle used in the crimes, prosecutors said.

Previous Coverage Of The Case

Members of the victims’ families had the opportunity to speak to the judge and to DiNardo before Finley formally handed down a sentence.

Following the impact statements, DiNardo himself spoke to the families and assembled crowd.

“If there is anything I could do to take back what I did on those two days, I would,” DiNardo said, adding he hopes the families can find peace in his remorse.

“If there is anything I could do to take back what I did on those two days, I would,” DiNardo said, adding he hopes the families can find peace in his remorse.

“I have also read the letters from the families of those whose lives you have shattered,” Finley said before delivering the sentence.

“The tone of of your voice voice stand out as such a total and complete disregard for the value of human life,” Finley said to DiNardo.

DiNardo is being sentenced to four consecutive life sentences for the four murders. Punishment for the other charges is being waived.

DiNardo is scheduled for an immediate transfer to the state correctional system at his request. He has sat in the Bucks County Correctional Facility in protective custody.

Kratz is expected to plead guilty during a 2 p.m. hearing.