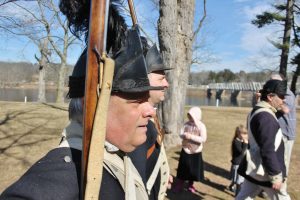 Although Washington Crossing Historic Park won’t hold fireworks this year, a celebration of America will still take place at the historic site.

Unlike the past two years, Washington Crossing Historic Park in Upper Makefield will not host fireworks this Fourth of July due to logistical issues that have cropped up, said John Godzieba, president of the Friends of Washington Crossing.

“There was limited parking and it was a very resource intensive event,” he said.

Last year, people were stuck in traffic for as long as an hour following the fireworks, Godzieba said.

While many locals will miss the fireworks show, Godzieba said there are still plenty to see at the state park.

In addition to this year’s Fourth of July rain or shine festivities, a car show was held at the park Sunday and the U.S. Army Band performed Monday evening.

Admission the Fourth of July festivities is $8 for adults (age 12 and up) and $4 for children (ages 5 to 11), and free for those under five.