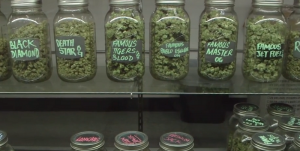 Gov. Tom Wolf said in a radio interview Tuesday that the Keystone State is not yet ready for the legalization of recreational marijuana.

Wolf’s spokesperson told the Wilkes-Barre Times-Leader newspaper earlier this summer that the governor supports the “statewide decriminalization of small amounts of marijuana, as well, to keep low-level marijuana users out of the criminal justice system.”

Wolf’s comments on KDKA-AM clash with what recreational marijuana activists have stated and even the view of his Democratic lieutenant governor running mate John Fetterman, who BillyPenn.com reported in spring supports the legalization of recreational marijuana. Pennsylvania Auditor General Eugene DePasquale recently called for the state to legalize marijuana, making note of the $581 million a year in taxes it could raise for state coffers.

A 2017 poll by Franklin and Marshall College found that 56 percent of Pennsylvania voters are in favor of marijuana legalization, a 16-point increase since 2016.

“Our poll mirrors the nation on this issue,” Franklin and Marshall College Poll Director Terry Madonna said at the time. “My sense is legalization is not for several years yet. We have a conservative legislature and Gov. [Tom] Wolf has said the state is not ready for it.”

Pennsylvania approved medical marijuana in 2016 and began rolling out their program last year. A number of dispensaries began to open this year, including Beyond / Hello in Bristol Township.

Late last month, state officials released information that more than 52,000 patients have registered to take part in the medical marijuana program. More than 30,000 people have received their medical marijuana cards.

“What we’ve done with medical marijuana is to fill a gap that existed in terms of doctors’ options for treating their patients,” Wolf said in the KDKA-AM interview.