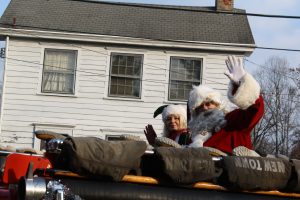 The Newtown Business Association‘s McCaffrey’s Food Markets Newtown Holiday Parade will step off at 2 p.m. The route will start at Stocking Works on South State Street, headed toward Washington Avenue before making a left turn and then right turn onto Sycamore Street where it will end at Durham Road.

Thousands are expected to line the parade route for the rain or shine event that will feature more than 50 community groups.

To top the festivities off, Santa and Mrs. Klaus will be visiting the parade.