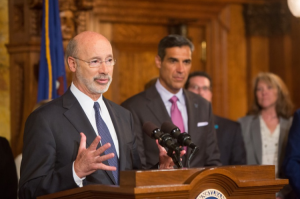 “As we all know, a man in a high-profile assault case at Stanford University was recently found guilty of rape but received as his sentence only six months in county jail with probation. Meanwhile, his victim will have to live the rest of her life with the feeling of violation and danger that he caused,” said Governor Wolf. “These kinds of leniencies send a message to the community that we are not serious about preventing sexual assault. These kinds of leniencies are unacceptable. ‘It’s On Us PA’ is delivering that message across the commonwealth.”

“At Villanova University, love and respect are essential to the life of our community. We believe that it is everyone’s responsibility to create a safe and caring community and prevent sexual violence,” said Villanova Men’s Basketball Coach Jay Wright. “This means that we step up and step in during the moments that matter. It’s on us, Nova Nation!”

“It’s On Us PA” is a statewide campaign that invites everyone to play a role in ending sexual assault. Building off the momentum of the national “It’s On Us” movement launched by President Obama and Vice President Biden in 2014, “It’s On Us PA” engages education leaders from school superintendents to college presidents, as well as students, teachers, faculty, staff, civic leaders, families, and communities, to make a personal and public pledge to play a role in preventing, addressing, and responding effectively to sexual violence.

“Pennsylvania must take a stand against sexual assault, and that’s what the ‘It’s On Us PA’ campaign is all about. We, as a commonwealth, must make clear that sexual assault is completely unacceptable and goes against our ideals as Pennsylvanians,” said Governor Wolf. “I am determined to make Pennsylvania a shining example to the rest of the world of what committed citizens can do to make our world better. It is truly on all of us to accomplish this goal.”

Since the campaign was launched in January, over 800 people – including representation from nearly 200 schools across Pennsylvania – have taken the pledge and signed on to the campaign. The launch of “It’s On Us PA” also kicked off a year of action, in which the Wolf Administration, along with the Pennsylvania Commission for Women, worked with community leaders and stakeholders across the commonwealth to develop state-level policy recommendations to address the pressing issue of sexual assault in our schools and post-secondary institutions.

After gathering feedback from leaders in education across the state, Governor Wolf proposed $1 million in the 2016-17 budget to invest in community partnerships that help prevent sexual violence and remove barriers to reporting in schools across Pennsylvania. Governor Wolf also directed the Department of Education to provide support and technical assistance by administering this program and aligning state-level resources to better support school districts and post-secondary institutions.

The Wolf Administration will also introduce a legislative package designed to ensure that a student’s education does not include harassment or violence, and that K-12 and postsecondary schools are well-equipped to prevent, respond, and address these issues. The legislative package will target the myriad of statutes and regulations that cover different types of harassment and violence in order to identify opportunities to make clear that Pennsylvania school districts and postsecondary institutions cannot – and will not – tolerate actions that jeopardize the health and safety of students.