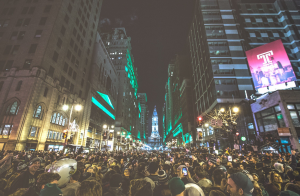 Officials are in the midst of preparing for what is expected to be one of the biggest sports championship celebrations in regional history.

Starting at 11 a.m. Thursday, the Philadelphia Eagles celebration will kick off in South Philadelphia with a parade. The parade will make its way through Center City and end at the steps of the Art Museum. At that time, a two-hour-long ceremony will take place, with room for up to 3 million spectators.

Fred Stein, executive director of parade-coordinator The Creative Group, said the celebration will provide several surprises that are “very visual.”

The parade will feature the Super Bowl-winning Eagles. They will be “going nice and slow” in their open-air vehicles, Stein told reporters.

The parade kicks off at 11 a.m. Thursday at Broad Street and Pattison Avenue, heading north toward the Art Museum. A formal celebration of the Super Bowl victory will begin at 1 p.m. at the base of the Art Museum. The parade will last about two hours and the following celebratory program will be an additional two hours. 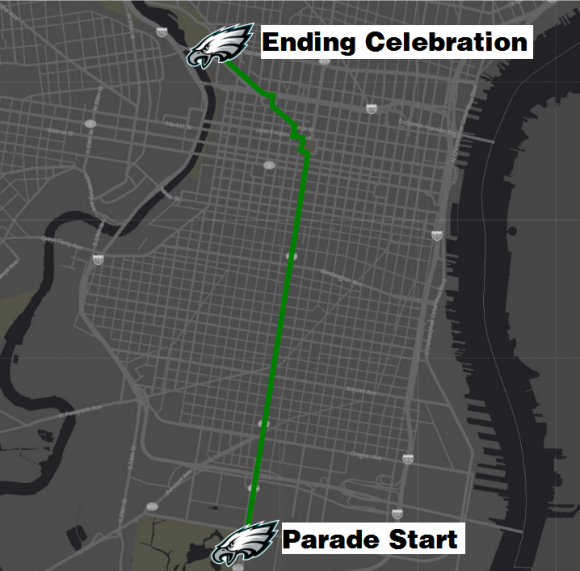 How To Get There From Bucks County

Whether you plan to take the road, the rails or maybe even hitchhike, we have a full guide on how to get to the celebration. Click here to read it.

How To Keep Up To Date

City officials encourage people interested in attending the celebration to sign up for the Philadelphia’s Office of Emergency Management alert updates by texting “ReadyEagles” to 888-777. Those alerts will be key on the day of the celebration and provide important information from organizers and public safety agencies.

NewtownPANow.com will provide updates on commuting to and from the city on Thursday.

What You Can Bring

Philadelphia police said visitors can bring bags, but should not leave bags unattended and immediately contact police if they notice an unattended bag. Water and food are permissible, but the mayor warned people not to bring backpacks of beer.

Where To Go To The Bathroom

While many private business’ bathrooms will likely be closed, about 850 port-a-potties will be set up for those taking part in the celebrations.

Where To Watch If You Can’t Attend

All the local TV stations will be providing coverage. The Eagles said NBC 10 and NBC Sports Philadelphia will be the official broadcast partners for the celebration.

How To Not Lose Your Kids