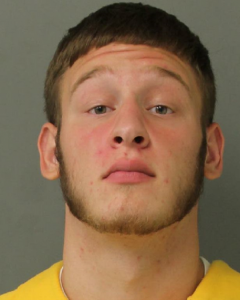 A man who went on a robbery spree that hit a Newtown Township store was sentenced to state prison last week.

Shane Wilcox-Wallace, 21, of Warminster, was sentenced to four and one-half to 10 years in state prison by Bucks County Judge Wallace Bateman last Friday in Doylestown. He was also ordered to serve five years of consecutive probation for the robberies and cannot have contact with his victims. The judge also ordered him to pay almost $6,000 in restitution and to undergo drug and alcohol and anger management treatment in prison, according to the Bucks County District Attorney’s Office.

Wilcox-Wallace pleaded guilty to six robberies, a theft, and a burglary that took place between January and April 2017.

In early March 2017, he accosted a man sitting in a car at the Creek Apartments in Warminster, pointed a gun at his head, and robbed the man of more than $500 cash and a cell phone.

A few weeks later, he robbed a 7-Eleven store at 5401 Neshaminy Boulevard in Bensalem with two juveniles. He also attempted to rob another Bensalem 7-Eleven but fled after a clerk spotted the trio approaching.

After the Bensalem robbery, the three returned to Warminster and the two juveniles robbed the Sunoco store at 890 East Street Road while Wilcox-Wallace waited outside.

Deputy District Attorney Monica Furber said in court that Wilcox-Wallace instructed the teens how to commit the robberies, telling them to “remain confident and act like they were in charge.”

Wilcox-Wallace admitted to burglarizing a home in the 200 block of Florence Avenue in Warminster. He said he crawled through a window in search of money after banging loudly on the door, scaring the female occupant into running upstairs and hiding until he fled.

Wilcox-Wallace was abandoned as a young by parents who were alcoholics and addicted to drugs. He was then placed in the foster home system where he was beaten and sexually abused.

“You really didn’t have much of a chance growing up,” the judge remarked.

Wilcox-Wallace said he robbed the businesses to gain money for drugs, a coping agent for his feelings of rejection and despair.

“This is someone for whom there is hope,” Oetinger argued. “He’s redeemable. He’s able to be rehabilitated.”

Furber made the case that Wilcox-Wallace’s upbringing did not minimize his crimes.

Wilcox-Wallace said before the judge that he now is taking part Alcoholics Anonymous and church functions while behind bars. He further stated his brother has offered him a job once he is released from prison.