Provided by the Danny DeGennaro Foundation: 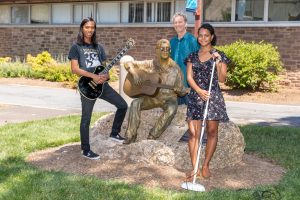 A fundraiser for the nonprofit organization created to preserve and further the legacy of the late Levittown musician by the same name, the concert also features performances from up-and-coming musicians the Foundation has been mentoring, as well as Danny DeGennaro Foundation 2018 Bucks County Community College scholarship award winners Sylvia Salas and Bee Niranon.

Salas, of Levittown, a Psychology major, said writing and singing songs is her creative outlet.

“I just sing, mostly in the shower,” she said. “I like writing my own songs, sometimes for personal expression.”

At the Sept. 28 concert, Salas will sing a pair of songs, one by Lana Del Rey and the other by Rihanna. Salas will be accompanied by a string trio, including violinist Alyssa McGarvey of Newtown. Salas said she’s honored to be part of the Foundation and said its work is “like growing roses in a garden of ashes.”

Local rock band All Lit Up will open the concert. 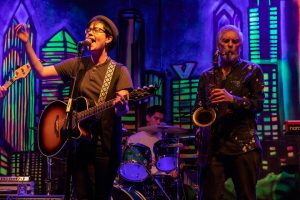 Singer/songwriter/guitarist Cara Cartney will headline the VIP area at the concert. The Foundation’s mentors, Johnny Betz and sax player Mike Reinig, took Cartney, 30, under their wing three years ago.

“They’re amazing musicians,” Cartney said. “I love everything they do. They just have so many great ideas. They hear things that other people don’t hear. They’ve been doing it for so many years.”

For the last six years, Cartney has hosted open mic nights at Sparky’s World Famous in Levittown. The Foundation has since assisted with several videos and recordings and plan on helping with the recording of an upcoming EP.

“When I first started I was afraid to even perform in front of people. I was working on just doing cover songs,” Cartney said. “It’s amazing to me what I can do now. Now I’m ready to help other people and work more on my originals.”

Cartney will play alongside Reinig and Foundation mentor Steve Burke, who, in addition to playing bass, will back her up with cello and violin.

Burke teaches strings and piano at Pro Line Music in Falls Township and has been mentoring Foundation scholarship award winners since 2015.

In the 1970s, he played in the Torpedoes, along with DeGennaro.

“The whole idea with the Foundation is to find people with a creative spark and see if you can fan it,” Burke said. “Every kid I’ve met in the program is above average. They want to be performers and have some of the nuts and bolts figured out already.”

Burke is also arranging performance material for Salas, who he describes as being “very relaxed in front of a crowd.”

“I always give them the same pep talk,” he said of mentoring young musicians on stage presence. “Record yourself. Play in front of a mirror. Don’t try to sound like anyone else. Have your material down.”

The fourth annual Creative Inspiration concert, a fundraiser for the Danny DeGennaro Foundation, will be held on Sept. 28 from 7 p.m. to 11 p.m., with a 6 p.m. VIP concert, at the Zlock Performing Arts Center at Bucks County Community College, 275 Swamp Road in Newtown. Tickets cost $30 general admission and $50 for a VIP reception, which includes beer, wine and hors d’oeuvres. Reserved seating is limited. Buy your tickets at Zlock Performing Arts Center Box Office,  215.968.8087 or online at bucks.edu/tickets. Discounts are available for Bucks alumni, military and seniors ( 65+). Contact the box office for savings code.