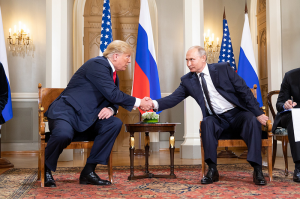 More than 4,100 miles away from Helsinki, Finland, President Donald Trump’s comments following his meeting with Russian President Vladimir Putin had an impact in Lower Bucks County.

The American president’s statements that he believes Putin’s claims that his strongman government did not interfere with the 2016 United States election drew strong comments from Democrats and Republicans in the United States.

“President Putin was extremely strong and powerful in his denial today,” Trump said when questioned if he asked Putin about the election interference. “President Putin says it’s not Russia. I don’t see any reason why it would be.”

The comments echo previous statements and Twitter posts where the president has disagreed with reports from agencies he oversees that the Russian government waged an influence campaign during the 2016 election. Just last week, Trump was briefed on a number of indictments by the U.S. Department of Justice relating to Russian government officials who were allegedly part of the election interference.

“I have President Putin, he just said it’s not Russia,” Trump responded when asked Monday about whether he believes the American intelligence community’s assessment on the election interference.

Fitzpatrick, a Republican, is a former FBI special agent who investigated political corruption among other things. He released the following statement after Trump made his comments:

“Our nation must never tolerate a Russian autocrat that seeks to interfere in our elections. As a former FBI Special Agent, I support our Intelligence Community, and I stand by their conclusions. President Trump missed the mark today in failing to confront Vladimir Putin on these realities. The President must acknowledge that Putin directed Russian actors to interfere and undermine our democratic process. Russia is not our ally and Putin is a KGB thug. We must serve harsh justice to those who engage in activities that threaten our democracy, continue an illegal occupation in Ukraine, and support the brutal Assad regime in Syria.”

Fitzpatrick, who wrote-in Mike Pence instead of voting for Trump in the 2016 general election, was not alone among Republicans speaking out against Trump’s comments in Helsinki.

Republican Senator Pat Toomey of Pennsylvania stated that “Putin is a bad actor” and called for the government to impose “tough new sanctions on Russia.”

Speaker Paul Ryan, the top elected Republican in the House, said that “there is no question Russia interfered in our election and continues attempts to undermine democracy here and around the world.”

“Today’s press conference in Helsinki was one of the most disgraceful performances by an American president in memory. The damage inflicted by President Trump’s naivete, egotism, false equivalence, and sympathy for autocrats is difficult to calculate,” Republican Senator John McCain, who has been mocked by Trump and often disagrees with his foreign policy, said in a statement.

Republican Senator Lindsey Graham, who often supports the president, Tweeted: “Missed opportunity by President Trump to firmly hold Russia accountable for 2016 meddling and deliver a strong warning regarding future elections. This answer by President Trump will be seen by Russia as a sign of weakness and create far more problems than it solves.”

Scott Wallace, the Democrat running against Fitzpatrick in the fall election, released comment on Twitter after Trump’s speech:

It's ​shocking that Trump refused to confront Putin over Russia's meddling in our elections – taking Putin's word over our ​own government's.​ @RepBrianFitz must condemn this ​outrage & ​demand that Trump ​tell Putin ​to stay the hell out of American democracy.

Trump "missed the mark." Are you kidding me?! @RepBrianFitz missed the mark – this attack on our democracy and failure by our president demands outrage and unconditional rejection. We need a Congress who isn't afraid to criticize Trump and protect our democracy. https://t.co/KBYjnmFLAC

“What could possibly cause @realDonaldTrumpto put the interests of Russia over those of the United States?” he questioned.

“Instead of holding Vladimir Putin accountable in Helsinki, President Trump embraced him and in doing so diminished America’s standing in the international community and shamed the office of the presidency,” Democratic Senator Bob Casey of Pennsylvania tweeted.

“This is a sad, shameful moment for our great nation,” said Democratic Senator Tim Kaine, who served as Hillary Clinton’s running mate.